Residents of Hamburg have voted to remain a left-wing stronghold. In spite of a clear victory for the Social Democrats, the euroskeptic Alternative for Germany has also won its first parliamentary seats in the west. 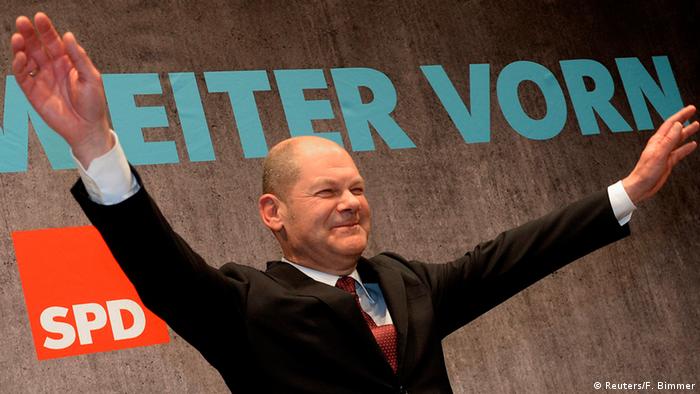 Despite emerging as clear winners, the center-left Social Democrats (SPD) lost their absolute majority in the Hamburg state parliament elections on Sunday, where they have ruled almost continually since World War II.

Germany's oldest political party came in at 46.5 percent of the vote, according to exit polls, meaning they will have to form a coalition. The SPD's presumed partners are the Green party, which exit polls have put at 11.5 percent.

But the Greens have promised "tough negotiations" if approached to form a coalition, and warned that the SPD should not expect to deal with pushovers.

Hamburg Mayor Olaf Scholz (pictured above), a member of the SPD, vowed not to "disappoint anyone."

Gains for the AfD as the CDU sinks

The election was also a victory for the euroskeptic Alternative for Germany (AfD) party, who with 5.5 percent and therefore seven seats have squeaked into a western state parliament for the first time since their victories in the former East Germany last year. A party needs 5 percent to claim seats in the legislature.

Chancellor Angela Merkel's Christian Democrats (CDU) saw their worst ever results in the port city-state, with only 16 percent of Hamburgers voting center-right. Paul Ziemiak, head of the party's youth wing, called the Hamburg election a "warning signal" for the CDU in an interview with news agency Reuters.

The economic liberals in the Free Democratic Party (FDP), shut out of the federal government for the first time in the most recent elections in 2013, also narrowly won seats in Hamburg's parliament with between 7 and 7.5 percent support. FDP candidate Katja Suding called the result "sensational" and said she was "proud" of what her party had accomplished.

The Left Party also cleared the 5 percent hurdle at 8.5 percent, leaving only the protest party The Pirates shut out, with only 1.5 percent of the vote.