It's fall, and the grape harvest has begun in many wine growing regions across Germany. Bavaria-based Master of Wine, Romana Echensperger, explains the latest trends in German wines, from chardonnay to sparkling wines. 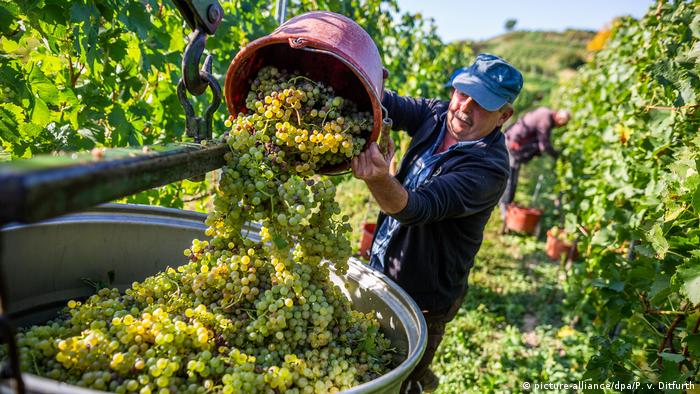 DW: Winegrowers have already started to harvest grapes in some parts of Germany. Will 2019 be a good vintage?

Romana Echensperger: It is going to a very good year! The winegrowers did, however, face some challenges due in particular to the heat wave — quite a few grapes were lost to sunburn. But the ripening process has slowed down a little compared to 2018, it is relatively normal. So we can look forward to a very promising vintage. Last year the yield was great, this year it will be a bit less but it's still within the normal range.

What are the key trends in German vineyards this year?

German sparkling wine is becoming increasingly popular. The quality has become incredibly good. It takes a lot of expertise, and the winegrowers are learning how to make great sparkling wine.

Chardonnay is another trend. Today, the grape is cultivated on 2,000 hectares of land, compared to about 200 hectares in the 1990s. This wine is back with a new style, not as lush, but fresh with only a dash of new oak. These wines are unbelievably good and balanced. In general, white wine is increasingly in vogue in Germany. Twenty years ago red wine was on the rise, but today people in Germany drink more white wine than red wine.

The summer of 2018 was hot and dry, as was this year. How does that affect the plants, and the wine? Germany is the #1 exporter of wine to norway, says Master of Wine Romana Echensperger

Viticulture is clearly becoming more challenging. Winegrowers really struggle with weather extremes. In 2017, there was a lot of rain followed by years of heat and little precipitation. In 2017, the winegrowers plucked some of the foliage around the grapes so the air could circulate, the moisture could dry off and to prevent fungal diseases.

In 2019, they pretty much did the same — and in some regions they lost 30% of the grapes to sunburn! What was the right thing to do in 2017 was totally wrong in 2019. The winegrower has to be very watchful, and act wisely and rapidly. In the end, it always takes a bit of luck, too.

Also, winegrowers have more or less stopped using the herbicide glyphosate, for environmental reasons and with an eye on climate change.

Will winegrowers in Germany have to rethink the varieties they grow as the climate changes?

That's a big discussion at the moment, wine-growing measures can play a big role. But take Riesling grapes, for instance, they grow fine in far warmer regions. So as far as grape varieties are concerned, there will be no change for the time being.

But of course, climate change poses new problems and we will have to find new solutions. I just toured the Palatinate wine-growing region, which is grappling with the Esca grape disease. A kind of bacterium attacks the grapevine's trunk, causing the plant to die within a few months. Esca ravages a good part of the vineyard, but scientists don't know why. In the past, the disease was only known in southern Europe, for example in Bordeaux and Sicily. Due to global warming the problem seems to have spread to Germany. Vineyards suffer huge losses and there are no countermeasures yet.

With an eye on environmental protection and ecological cultivation, in how far are fungus-resistant grape varieties an alternative?

You would think fungus-resistant grape varieties are a grand idea. Then you taste the wine and think, no, it's not such a good idea after all. I just don't think it tastes good. These varieties have not been and are not grown in large amounts in Germany.

What are some of the main export markets for German wines?

In China and the US, we've made good headway. Scandinavia is at the forefront — Germany is today the largest supplier of wine in Norway.

Master of Wine Romana Echensperger worked as head sommeliere in various top restaurants in Germany and Spain before setting up her own business in 2011. Today she works as a wine consultant both in Germany and abroad, writes articles about wine for German and Dutch magazines, and holds workshops for the German Wine Institute on the many facets of German wine.

Cheap image, flagging economy, few exports: South Africa's winegrowers are struggling with many obstacles. There is also a major issue over water. (18.09.2019)