The lower chamber of the Spanish parliament has approved controversial legislation easing women's access to abortion. 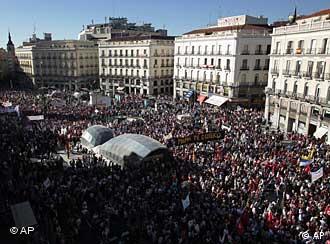 The government-sponsored bill, opposed by Spain's Catholic Church and conservatives, would allow abortions up to 14 weeks into pregnancy.

Deputies voted 184-158 to back Socialist Prime Minister Jose Luiz Rodriguez Zapatero's reform bill. It now goes to the Senate, where passage is expected.

Unter existing law, more than 100,000 abortions are already carried out annually in Spain. They are only permited in exceptional cases. The new legislation would also allow an abortion up to the 22nd week if there is a risk to the mother's health or if the foetus has serious medical problems.

The head of Spain's conference of bishops warned in the run-up to the vote that abortion was a crime and that Spanish lawmakers who backed the reform risked excommunication.

The ruling Socialists agreed on Thursday to drop the most controversial of the reform measures, which would have allowed girls of 16 to end a pregnancy without parental consent.

Under the amended text, girls would have to inform their families of a decision to abort, except if they face "a clear risk of family violence, threats, pressure or mistreatment."

Our guest on 20.12.2009 Dr. Karl Jüsten, Prelate and Head of the Commissariat of German Bishops, or the Catholic Office in Berlin

Karl Jüsten could be described as the chief lobbyist of the Catholic Church in Germany. For nine years now he has been head of the Catholic Office in Berlin. (15.12.2009)

Irish anti-abortion laws under the spotlight in Strasbourg

Three women have travelled to the European Court of Human Rights in Strasbourg to contest Ireland's strict anti-abortion legislation. (09.12.2009)