Spanish activists vent their anger by blocking evictions | Europe | News and current affairs from around the continent | DW | 06.07.2011

As Spain's economic crisis continues to bite, more and more families are struggling to pay their mortgages. But campaigners for fairer housing regulations are preventing repossessions. 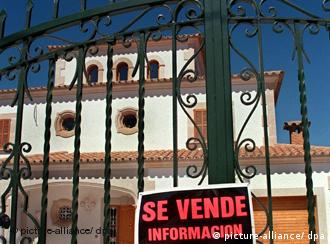 Many in Spain are struggling to pay their mortgages

When Anwar received notification in June that his home in Madrid was about to be repossessed because he had failed to keep up with mortgage payments, it looked like the end of this Lebanese man's dreams of making a success of his life in Spain.

"There came a moment when I had to decide between eating and paying," Anwar said. "And I chose to eat."

But several weeks later, Anwar and his wife and daughter are still in the apartment, after dozens of activists gathered to help him on the day of the scheduled eviction and peacefully stopped court officials from entering the premises. This unemployed baker is likely to face a new eviction order in the near future, but for the time being he is staying put. 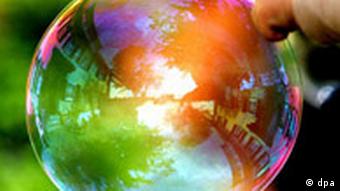 His case is part of an anti-eviction drive across the country that reflects mounting anger at unforgiving mortgage laws and the lenders that enforce them.

Evictions have soared over the last two years, since Spain's decade-long real-estate bubble burst. With the construction industry having driven the Spanish economy, unemployment has risen to 21 percent, the highest in the European Union.

"The main problem in Spain is the unemployment rate. If you are unemployed, you cannot afford to pay back your loans," said Ismael Sanz, an economist at Rey Juan Carlos University in Madrid. "The percentage of bad loans has increased from 5.5 to 6.5 in just one year and this is a percentage that starts to put Spanish banks' balance sheets at risk."

The legacy of the property boom

While activists have stopped around 40 evictions in recent months, they say over 200 are nonetheless taking place each day across the country.

"The authorities need to look at who really benefited from the real estate boom," said Aida Quinatoa, an Ecuadorian who has been campaigning for months to help immigrant families avoid eviction. She said that many lenders employed fraudulent practices to take advantage of the real estate boom. "It cannot be that thousands of families have been embezzled and yet no one is to blame - here in Spain, which is supposed to be a democracy and a country that respects human rights." 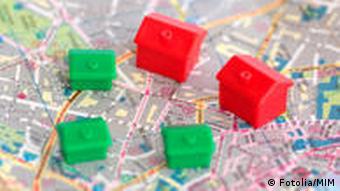 Unemployment caused some to fall behind on mortgages

Something that particularly angers activists is that homeowners often still owe banks money, even after their house has been evicted.

"If you cannot afford to pay back your loan, the problem is that you lose your home but you might still owe some money, because maybe the value of the home is lower than the value of the debts you have still with the bank," said Ismael Sanz.

This problem of negative equity is particularly acute in Spain, where prices are still falling following the property sector's collapse. Aida Quinatoa cites the case of a fellow Ecuadorian who took out a mortgage worth 280,000 euros ($340,000), and yet after his house was repossessed he owed the bank 325,000 euros, including interest and legal fees.

Quinatoa and fellow campaigners say lenders are frequently acting on the fringes of the law in the way they carry out repossessions. They want the law reformed so that when a house is handed back to the bank, all debts are cleared, as is the case in some other countries.

Though such a major change still looks far off, on July 1, the Socialist government announced plans to modify regulations governing the mortgage market, to help families with large debts. It wants to increase the portion of a debtor's revenue that is protected from seizure by the bank following non-payment and ensure repossessed houses fetch a higher, fairer price when sold on.

Apart from offering a helping hand to families that fear being left out on the street, the current anti-eviction campaign has also served to give renewed momentum to the "Indignado," or 15-M protest movement, which saw hundreds of young people camp out in squares across Spain in the spring. The movement, which has been deeply involved in preventing evictions, wants an overhaul of Spain's political and economic system.

"In this situation of crisis, it seems as if the blame is on the citizens, who didn't even know what was going on," said Eduardo Munoz, a spokesman for the 15-M movement. "We're prepared to take this very far."