The driver of the derailed high-speed Spanish train, which killed at least 78 people, has been officially charged with reckless homicide. So far, he has refused to answer police questions. 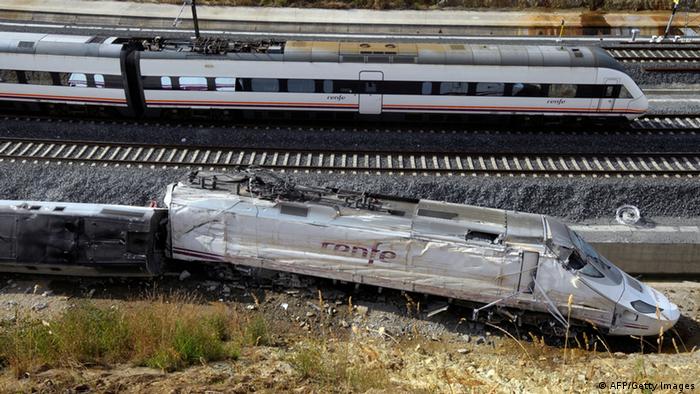 Train driver Francisco Jose Garzon Amo, 52, was released from hospital on Saturday and taken to a police station in Santiago de Compostela, according to Spanish authorities.

"He… has been arrested by the police on charges of reckless homicide," Interior Minister Jorge Fernandez Diaz said. The interior minister went on to say that Garzon Amo would appear before a judge on Sunday. Under Spanish law, a suspect can be detained for a maximum of 72 hours before seeing a judge.

Garzon Amo was driving an Alvia high-speed passenger train on Wednesday, when it derailed at the village of Angrois near Santiago de Compostela in northwestern Spain, leaving at least 78 people dead. The train accident was one of the worst in Spain since the Second World War.

The suspect allegedly barreled into a turn going 190 kilometers per hour (118 miles per hour), twice the recommended speed of 80 kilometers per hour. Garzon Amo was a 30-year veteran of Spain's state-owned freight and passenger rail company, Renfe. He had been driving trains for 13 years, according to Renfe.

The president of ADIF, the state-owned company responsible for Spain's rail infrastructure, said that Garzon Amo should have begun slowing down four kilometers before the bend.

"Four kilometers before the accident happened he already had warning that he had to begin slowing his speed," ADIF President Gonzalo Ferre told Spanish public television TVE.

According to ADIF, an automatic speed control system - known as the European Rail Traffic Control System - stopped five kilometers south of where the crash occurred. Where operational, the system can slow trains down by automatically applying the brakes. That means that the driver had a greater responsibility to control the train's speed in the area where the accident occured.

The AFP news agency reported that at least seven foreigners were among the dead, including nationals from Algeria, Brazil, the Dominican Republic, Italy, Mexico, Venezuela and the US.