On Spain's national day, thousands of people demonstrating against Catalan independence marched through Madrid. This comes ahead of the verdict in the trial of leading Catalan separatists. 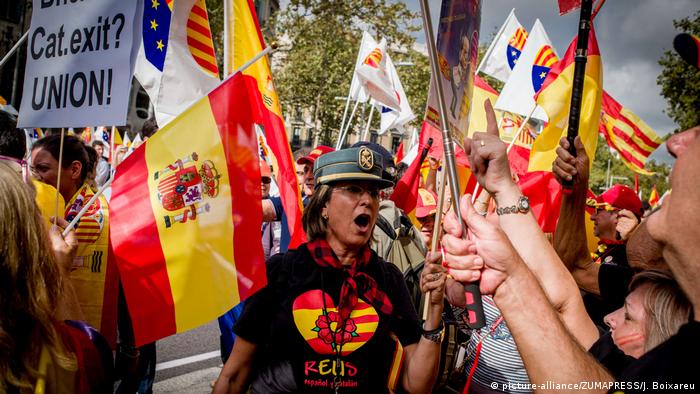 Thousands of people opposed to Catalan independence took to the streets in Spain's capital, Madrid, on the country's national day on Saturday.

The demonstration comes ahead of the announcement of the verdict in the trial of leading Catalan separatists expected early next week.

The 12 defendants, most of them members of the former Catalan government, could face long prison terms if convicted for the 2017 independence bid that resulted a major political crisis. The main charges include rebellion and sedition.

The number of participants in Saturday's rally, some 10,000, was significantly lower than the 65,000 people who took part in a similar demonstration two years ago.

Meanwhile, activists from the Catalan National Assembly (ANC) and Omnium Cultural, the two biggest grassroots pro-independence groups, have called for rallies across the region when the verdicts are announced. There have also been calls for a general strike.

Fernando Sanchez, who leads the main anti-separatist group, Sociedad Civil Catalana, told journalists: "We want to make an appeal for calm and for responsibility."

The leaders of all the main opposition parties also attended the Madrid event ahead of the November 10 elections, as did the presidents of all the Spanish regions — except for those from Catalonia and the Basque Country.

For years now neither region, both of which have strong separatist movements, has attended the event.

Catalan separatists claim national authorities are trying to manufacture "a violent narrative" in the movement. Tensions are high ahead of a ruling against 12 leaders of a failed secession bid. (29.09.2019)

Prosecutors said members of a pro-independence group were in "advanced preparation for terrorist acts." If confirmed, it would mark a major shift in what has been a largely peaceful Catalan nationalist movement. (23.09.2019)

Thousands march in support of Catalan politicians on trial

Supporters of Catalan politicians on trial over an attempted secession from Spain have taken to the streets in Madrid. Catalan independence is set to play a major role in Spain's upcoming national election on April 28. (17.03.2019)

Firefighters are battling wildfires in several regions of Spain. Four major blazes in Catalonia are threatening villages, and have destroyed thousands of hectares of forest and farmland. The fires have been sparked by an unseasonably early heat wave.

Spanish authorities say that "a certain amount of data" was taken from the phones of the country's prime minister and defense minister through the Pegasus spying tool.