Hundreds more people have had to leave their homes on the Spanish island of La Palma. The lava flow has continued to pose a threat in the area. 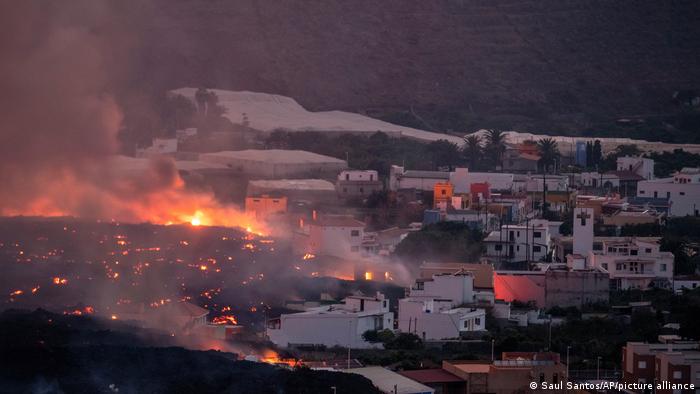 There are concerns that the Cumbre Vieja volcano could continue activity for the next three months, leaving many more homes at risk on the island of La Palma

Volcanic activity on La Palma in the Canary Islands has prompted another round of evacuations, local media reported on Thursday.

According to Pevolca, the committee managing the emergency response, 500 people had to leave their homes overnight as molten lava moved deeper into the coastal town of Tazacorte.

Cumbre Vieja began to erupt over a month ago. Around 7,500 people have had to flee their homes since the start of the eruption.

The lava flow has completely buried homes and businesses, destroying the livelihoods and possessions of many residents.

The mayor of Tazacorte, Juan Miguel Rodriguez, told local broadcaster RTVE that some are beginning to lose hope. "There is already a certain degree of despondency and desperation, waiting for the volcano to subside,” Rodriguez said. Some La Palma residents have lost everything in the eruption

Around 2,185 buildings have been destroyed since the eruptions began.

It's feared the volcanic activity could continue for the next three months and many more homes could be destroyed.

The Spanish government has vowed to assist in the rebuilding of destroyed and damaged infrastructure.