The Spanish high court nullified an international arrest warrant for the Catalan leader and four former ministers in exile in Belgium. The court said that the politicians had shown their "intention to return to Spain." 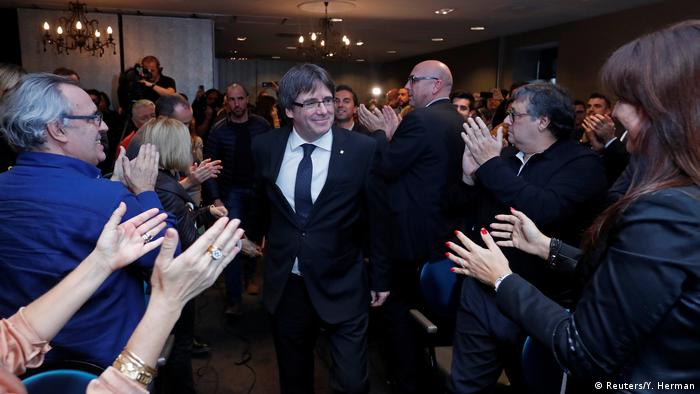 A Spanish judge withdrew a European arrest warrant for Catalonia's exiled pro-independence leader Carles Puigdemont and four of his former ministers on Tuesday.

Supreme Court magistrate Pablo Llarena said that the individual warrants were no longer valid as the alleged crimes were committed as a group and that the politicians under investigation had illustrated their  "intention to return to Spain" in order to run for upcoming elections in Catalonia.

The judge kept a Spanish arrest warrant in place however, which means the Catalan leader would be detained immediately upon arrival in Spain.

The surprise decision came just a day after Puigdemont and his allies attended an extradition hearing from their exile in Brussels.

Puigdemont fled to Belgium after declaring his region independent from Spain in a referendum that saw voters in Catalonia vote overwhelmingly to secede from Madrid's control — although the ballot was not sanctioned by Madrid and less than half of the electorate turned out to vote.

The court's decision came as campaigning began for Catalonia's regional elections on December 21, called by Madrid after it dissolved Barcelona's parliament over the "rebellion" of its leaders.

Along with Puigdemont and his ministers in Brussels, all eight are under investigation for rebellion, which can carry a prison sentence of up to 20 years.

Speaking via video message to supporters in Barcelona, Puigdemont said the upcoming regional elections meant Catalonia must "choose between nation or submission, they can choose between Catalan institutions or dark characters in Madrid."

Two prominant Catalan lawmakers and two pro-independence activists have been refused bail by Spain's Supreme Court. Six other separatists were released on bail and intend to run in this month's regional elections. (04.12.2017)

Madrid stopped short of blaming the Kremlin of outright interference in Spain's domestic affairs. But there is growing evidence that the Kremlin feels empowered by sowing divisions in Europe and the United States. (13.11.2017)

The Spanish Prime Minister Mariano Rajoy called on Catalans to vote in huge numbers in a December election to "restore normalcy." Rajoy was in Barcelona on his first visit since Madrid imposed direct rule on Catalonia. (12.11.2017)