Catalonia's ruling party chief and pro-independence leader Artur Mas and his allies have won regional polls. His alliance will have absolute majority in the parliament if it teams up with the radical left-wing CUP. 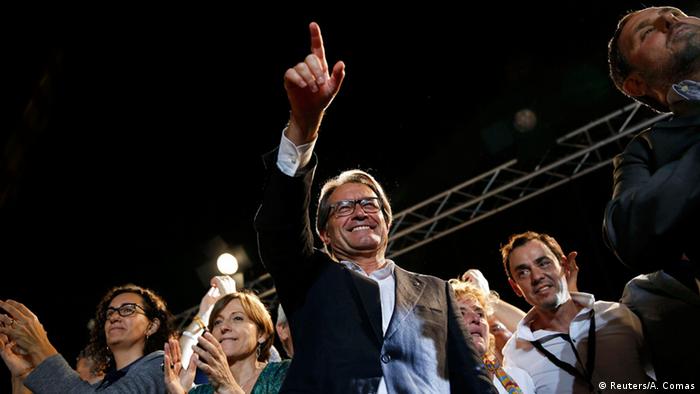 With 99 percent of votes counted, Artur Mas' "Together for Yes" coalition and its alliance partner the Popular Unity Candidacy (CUP) have won 72 seats in Catalonia's 135-member parliament.

His liberal ruling party, the Democratic Convergence of Catalonia (CDC), formed the separatist coalition "Together for Yes" with the Republican Left of Catalonia (ERC) and other citizen groups ahead of the regional polls.

"We have won," Mas said, but his alliance managed to win only 47.8 percent of votes.

"Together for Yes" could gain absolute majority in parliament if it teamed up with the the radical left-wing separatist party, CUP, whose chief Antonio Banos said "Catalan sovereignty is clear" after the results were announced on Monday. However, Banos' CUP does not want Artur Mas to lead the separatist movement, suggesting that Mas' plans for independence may face hurdles.

77 percent of Catalonia's 5.5 million voters turned out for the polls on Sunday. The vote for the regional parliament was billed by Mas as a referendum on whether the region should secede from Spain.

Last November, Mas tried to hold a referendum for the region's independence, but failed after the Spanish Constitutional Court declared such a vote illegal.

The drive to break the rich northeastern region away from Spain and create a new state in Europe has prompted a fierce standoff with the central government in Madrid in recent months.

Catalonia has its own cultural traditions and language. Catalan is spoken along with Spanish, and was suppressed under three decades of General Francisco Franco's dictatorship. Catalonia has seen numerous bids for greater autonomy over the past century.

Ahead of Sunday's poll the Spanish Prime Minister, Mariano Rajoy, had stressed again that his government would not allow Catalonia's secession and that "No one will destroy the unity of Spain."

EU leaders have also suggested that an independent Catalonia will be cut off from the bloc and from the euro currency zone.

Exit polls predict a majority for separatists in Catalan assembly

Voters in Spain's Catalonia region have cast ballots Sunday, giving pro-secession politicians a mandate to push for Independence. However, Spain's central government has said it would stop the region from breaking away. (27.09.2015)

Voting has begun for the regional administration in Spain's richest region. Catalonia's separatist leaders see the vote as a plebiscite on independence from Madrid. (27.09.2015)

The upcoming elections in Catalonia are viewed as a plebiscite for independence. Many regional businesses fear losing the Spanish market if Catalan independence is achieved. (25.09.2015)