The all-civilian crew aboard the SpaceX Inspiration4 flight mission returned safely to Earth. Their return comes after spending three days in Earth's orbit, in a pioneering mission for space tourism. 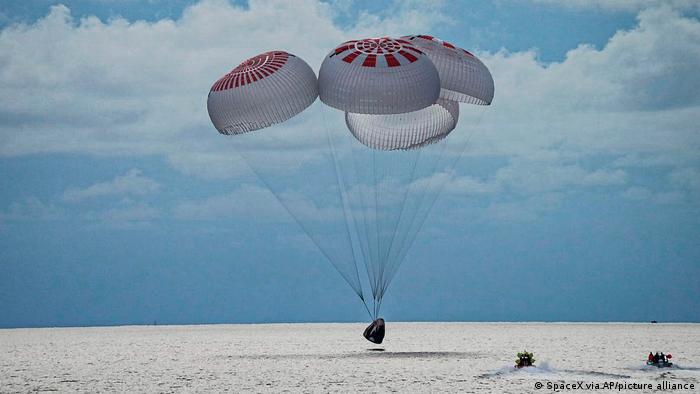 After orbiting the planet, the first all civilian space flight crew aboard SpaceX's Inspiration4 mission landed in the Atlantic on its return to the atmosphere on Saturday.

They're the first people to orbit the Earth without a professional astronaut — with their trip marking a new chapter in space tourism.

What happened on their mission?

The successful return completes a three-day flight for the four amateur astronauts on board.

The crew blasted off into space Wednesday from the Kennedy Space Center in Cape Canaveral, Florida.

The shuttle reached a cruising orbital altitude of just over 363 miles (585 kilometers) within three hours of takeoff, which is higher than the International Space Station or the Hubble Space Telescope.

It is the farthest any human has flown from Earth since NASA's Apollo moon program ended in 1972.

On Saturday, the four citizen astronauts donned their helmeted flight suits and made final cabin preparations before the spacecraft continued autonomously to chart the return path back to Earth's atmosphere.

How did the crew react?

Their safe return to Earth was met with cheers from those watching from SpaceX Mission Control.

"Your mission has shown the world that space is for all of us," mission control told the crew.

"It was a heck of a ride for us ... just getting started,'' replied trip sponsor Jared Isaacman, the billionaire who paid an undisclosed sum for the trip.

Isaacman traveled with three crew mates he hand-selected and whose journeys into space he financed.

The crew will now be taken to Kennedy Space Center for medical checks before being reunited with their families.

SpaceX, founded by Tesla electric vehicle manufacturer CEO Elon Musk, is looking to expand its number of private flights to space — aiming for up to six per year.

Musk also sent his congratulations to the crew upon their safe return to Earth.