Denuclearization and peace on the Korean peninsula are top of Seoul's agenda following Joe Biden's projected win as president. South Korea's top diplomat has arrived in Washington for talks. 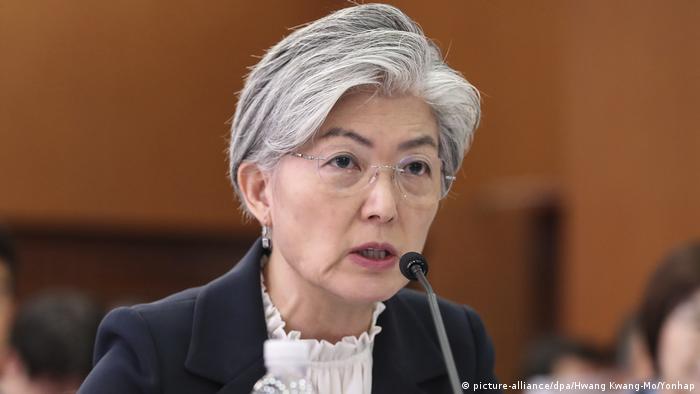 South Korean Foreign Minister Kang Kyung-wha is set to meet US Secretary of State Mike Pompeo in Washington on Monday for talks on strengthening the alliance between the two countries and the issues at stake with North Korea.

Pompeo had invited South Korea'S top diplomat after his scheduled visit to Seoul got cancelled last month after US President Donald Trump tested positive for COVID-19.

"I don't believe the US intends to return to the strategic patience [toward North Korea] of the past," Kang told reporters after visiting the Korean War Veterans Memorial. "It should be made based on various progress and achievements made the past three years."

South Korean President Moon Jae-in said on Monday that the country will solidify bilateral relations and develop the process of building peace on the Korean peninsula.

A day earlier, Moon congratulated Biden for his victory in the US presidential election, saying he was looking forward to working with the Biden team to reinforce future relations.

"Our alliance is strong and the bond between our two countries is rock-solid," Moon tweeted. "I very much look forward to working with you for our shared values. I have great expectations of advancing and opening up the future development of our bilateral relations."

In a statement, the South Korean presidency said Moon told his top aides that Seoul will cooperate with Washington to promote shared values including democracy, peace, human rights.

Moon also said South Korea will work to promote economic relations including on building a carbon neutral economy, which Biden has been promoting.

Negotiations, which seek to exchange the relaxing of US-led sanctions for disarmament steps by North Korea, have now stalled.

The outgoing US president has repeatedly demanded Seoul pay more to support the US troop presence in South Korea.