South Korea grills top executives over links to disgraced president | Asia | An in-depth look at news from across the continent | DW | 06.12.2016

A senior executive at Samsung has denied receiving favors for donations to scandal-linked foundations. More than 50 corporate groups donated to foundations belonging to the president's longtime confidant. 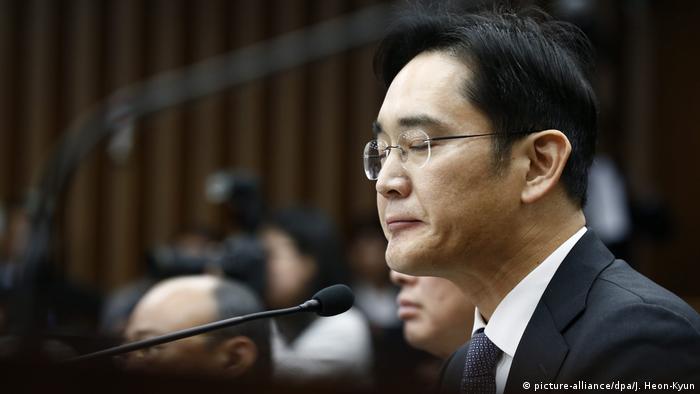 Mass anti-Park protest in Seoul ahead of impeachment vote

Hundreds of thousands of people have gathered in Seoul for the sixth-straight week to demand the resignation of South Korean President Park Geun-hye. The protests come ahead of an impeachment vote in parliament. (03.12.2016)

South Korean prosecutors allege President Park Geun-hye conspired in criminal activities as protests against her continue. The president is protected by prosecutorial immunity though her popularity has plummeted. (20.11.2016)

A majority of lawmakers in parliament have introduced a bill to impeach scandal-plagued President Park Geun-hye. The move comes ahead of a new wave of protests expected to draw close to a million demonstrators in Seoul, who demand she step down immediately.

South Korean lawmakers on Tuesday questioned the heads of the country's top conglomerates, including Samsung, Hyundai Motor and six other companies, about their involvement in a political scandal rocking the presidency.

Samsung Electronics Vice Chairman Lee Jae-yong said that while President Park Geun-hye had asked him to support cultural and sports-related developments during a one-on-one meeting, there had been no request for financial aid.

"There are many things that I feel embarrassed about and I regret as we have disappointed the public with many disgraceful things," Lee said.

"There are often requests from various parts of society, including for culture and sports. We have never contributed seeking quid pro quo. His case was the same," he added.

Park's presidency has been disgraced by an influence-peddling scandal involving her longtime confidant Choi Soon-sil, who prosecutors charged in November with influencing state affairs and directing funds to two non-profit foundations she used for personal gain.

At least 53 corporate groups donated to the foundations, with Samsung being the largest donor, providing 20.4 billion won ($17.46 million, 16.24 million euros) to the two foundations.

The hearing marked a rare moment for the country's most powerful business leaders, who rarely participate in such public events.

Meanwhile, Park is expected to face an impeachment vote on Friday after several weeks of mass protests in the capital.

If she steps down, she will be the first South Korea president to do so since the country's democratic reforms in the 1980s. The opposition sponsored motion is likely to pass with the support of 35-40 rebel MPs from Park's Saenuri party.

Even if the impeachment goes through, it would then need to be approved by the Constitutional Court, a process that could last up to six months. During this time Park would be suspended as president and her duties temporarily transfered to the prime minister.

The embattled president said Tuesday she would accept the results of Friday's vote but would not step down immediately.

"Even if the impeachment bill is passed, I am resolved to continue calmly for the country and the people, while watching the Constitutional Court procedures," Park was quoted as saying by Saenuri parliamentary floor leader Chung Jin-Suk.

After a meeting with Park, Chung said that the president was willing to accept a previous proposal that has since been withdrawn for her to voluntarily resign in April to pave the way for elections in June.

"We explained that the party's stance that had called for an April resignation and June presidential election has become realistically hard to maintain," Chung said.

The Saenuri party is worried that the scandal-tainted president could drain public support for the party as millions of people rally in the streets for her removal. Since the scandal erupted in October, Park has witnessed her approval ratings slide to an all-time low of 4 percent.