South Korea has accused North Korea of planting the landmines that seriously injured two of its soldiers along their common border. The South's military has warned that the North will pay a "harsh price." 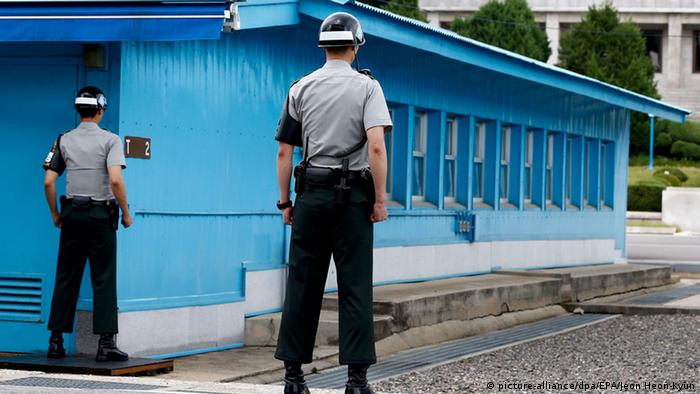 A spokesman for South Korea's Defense Ministry said on Monday that it believed that a total of three landmines had gone off in the incident last Tuesday that hit one of its patrols in the DMZ (demilitarized zone), a buffer zone that divides the two rival states.

"We are certain they were North Korean landmines planted with an intention to kill by our enemies who sneaked across the military border," ministry spokesman Kim Min-Seok told a Seoul press conference.

North Korea has announced it will push back its clocks by a half hour to mark the end of Japanese occupation following World War II. The new time zone will be known as "Pyongyang time," according to state media. (07.08.2015)

US ratchets up pressure on North Korea over nuclear issue

US Secretary of State John Kerry has assured South Korea of "ironclad" support from the US on a trip to Seoul. He demanded the North restart talks on its nuclear program, calling Pyongyang's recent conduct "horrific." (18.05.2015)

A group of women peace activists has crossed the militarized border between North and South Korea in a bid to promote reconciliation between the two countries. But the trip has provoked some criticism. (24.05.2015)

"We strongly condemn this cowardly act, which would be unthinkable for a normal military," said Major General Ku Hong-mo of South Korea's Joint Chiefs of Staff. He also described it as a violation of the armistice agreement that brought the fighting in the 1950-53 Korean War to an end.

The Joint Chiefs of Staff also warned that the North would "pay a harsh price proportionate for the provocation it made," however the Defense Ministry declined to comment on what specific retaliatory measures it might be considering.

Earlier, the United Nations Command, which monitors the armistice deal, had released a statement in which it said an investigation into the incident had determined that "the North Korean People's Army violated paragraphs 6, 7 and 8 of the Armistice Agreement by emplacing wooden box land mines along a known Republic of Korea patrol route in the southern half of the Demilitarized Zone, injuring two Republic of Korea soldiers."

It also said its investigation had found that the devices had been planted recently and deliberately.

One of the two soldiers wounded in the blast had to have both of his legs amputated, while the other lost one of his legs.

There was no immediate response from North Korea to the South Korean and UN Command statements.