Pyongyang and Seoul have reached a tentative diplomatic breakthrough after weeks of border tensions. While both sides softened their stance on recent provocative incidents, several key issues remain unresolved. 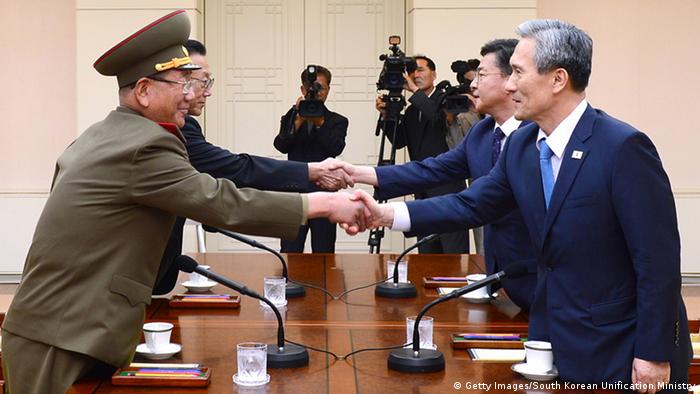 The two Koreas came to an agreement after a grueling weekend of negotiations that began in the border village of Panmunjom. Pyongyang lifted the "semi-war" state declared last week by leader Kim Jong Un. Seoul silenced its propaganda speakers at midday local time (0300 GMT).

South Korea had started up loudspeakers placed along the border earlier this month to send out loud propaganda broadcasts towards the North. The speakers had not been used in more than 10 years.

The North expressed regret that two Seoul soldiers were maimed in mine blasts in early August, although its leaders refused to explicitly accept their country had anything to do with the explosions.

However, South Korea's National Security Adviser Kim Kwan-jin called the North's reaction "very meaningful" and said getting a statement on the mine explosions from Pyongyang had been the toughest part of the negotiating process.

"We had to get a word of apology that has the North as the main agent," he told reporters.

The two sides also agreed to work on resuming reunions for families separated by the 1950-1953 Korean War. Dates for official discussions on the issue were still to be decided.

The agreement comes after weeks of military tensions between the two countries that began after the South accused the North of mine explosions at the border and restarted anti-North propaganda broadcasts. The North subsequently deployed submarines and increased artillery units at the frontline, while the South simulated bombing sorties in cooperation with the US, which has 30,000 soldiers permanently stationed in Seoul's territory.

South Korean President Park Geun-hye welcomed the deal, calling it "fruitful" and saying she hoped it would provide a "turnaround" on other issues. UN Secretary-General Ban Ki-moon "warmly welcomed" the deal, as did the US, with State Department spokesman John Kirby describing the talks as "a very tense several days."

"We welcome this agreement, but now it's up to the North to act and not simply make assurances with respect to their own military activities there along the border," Kirby said.

Experts expressed skepticism, however, citing last October's planned resumption of talks, which never worked out. "If the two sides fail to put aside ideological differences and approach these issues in a practical way, this agreement may go the same way as others," Cheong Seong-chang of the Sejong Institute think tank in Seoul told the AFP news agency.

North and South Korea have adjourned talks until Sunday afternoon after night-long discussions failed to resolve the growing tensions between Pyongyang and Seoul. Both countries have stepped up military preparations. (22.08.2015)

North Korea has ratcheted up war rhetoric against South Korea as the two nations traded artillery fire across the inter-Korea border Saturday. The South's troops are on full alert as the North's attack deadline looms. (22.08.2015)