Slovenia's central bank has confirmed that Governor Bostjan Jazbec is under investigation as part of the probe into alleged irregularities at the bank in 2013. The ECB has threatened legal action. 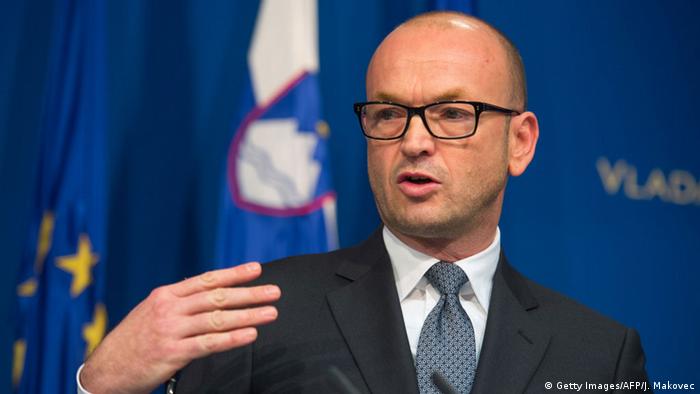 Slovenia's central bank confirmed on Thursday that Governor Bostjan Jazbec (photo) was being investigated by police as part of a probe into alleged irregularities during Slovenia's bank overhaul in 2013.

A central bank spokeswoman confirmed that Jazbec, who also sits on the European Central Bank's Governing Council, was under investigation.

Slovenia's General State Prosecutor Zvonko Fiser said on Thursday that a police raid on the country's central bank was legal. He said he could not act on the European Central Bank (ECB)'s claim that it infringed legal privileges and immunities.

The ECB has threatened to take legal action against Slovenia after police seized documents from the country's central bank on Wednesday. Fiser told a news conference that the operation had been ordered by an investigative judge as part of a probe into alleged irregularities during Slovenia's bank overhaul three years ago.

Police on Wednesday had confiscated documents in the raid at the Bank of Slovenia - one of the European Central Bank's (ECB) network of euro-zone central banks. Jazbec was questioned by local prosecutors over alleged abuse of office.

Police however rejected Draghi's call, arguing that central bank employees do not enjoy privileges which would exempt them from investigation in pre-criminal procedures.

The case is a rare fight with the ECB. The EU Commission said that it was awaiting the results of the investigation and that it was too early to comment further.

Twenty-five European banks have failed an in-depth review of their balance sheets but most have already taken remedial action. Italian, Cypriot and Greek banks were found to have the biggest shortfalls. (26.10.2014)

Slovenia's central bank chief, Bostjan Jazbec, has said he cannot rule out a bailout request from his struggling country as recession is deeper than expected. He urged speedier reforms in the eurozone nation. (15.11.2013)