Slovakia has opened a pipeline that is able to deliver gas from the EU to Ukraine as Kyiv grapples with Russian supply cuts ahead of the winter. The EU said a reverse-flow mechanism had been put into place. 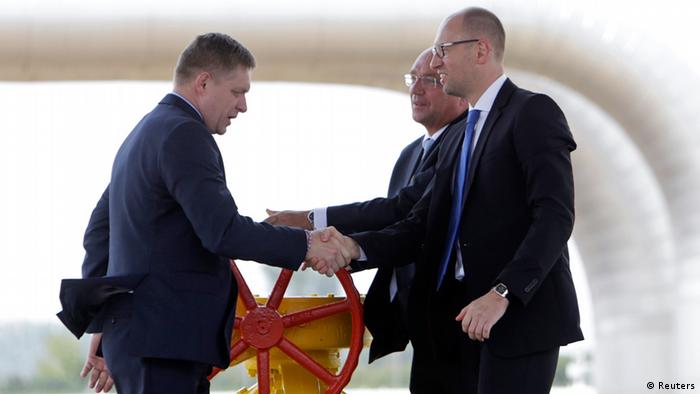 The pipeline for deliveries of EU gas to Ukraine was an upgraded and previously unused link leading from Slovakia's Vojany power station near the border to the western Ukrainian town of Uzhgorod, Slovak government officials said Tuesday after inaugurating the network.

The new link could potentially supply around 20 percent of Ukraine's current gas consumption in the event Russia cuts off gas supplies to Ukraine.

Slovak Prime Minister Robert Fico (left in the picture) told journalists that the reverse flows from Slovakia, along with existing pipelines from Hungary and Poland, could cover Ukraine's mid-term gas import needs.

"If we put together three reverse points in the nations mentioned, we can reach 25 billion cubic meters of gas supplies per year in the mid-term horizon, which would provide the solution Ukraine needs at the moment," Fico said in a statement.

The decision to open reverse gas flows eastwards is part of the EU's response to state-controlled Russian company Gazprom's move to cut supplies to Kyiv in a row over pricing after Moscow's annexation of Crimea.

Russia has halted gas flows to Ukraine three times over the past 10 years - in 2006, 2009 and since June of this year - but EU customers depending on Ukraine as a transit nation have not been affected so far this year.

Slovak pipeline operator Eustream estimated it would be able to ship 22.4 million cubic meters of gas on Tuesday, with the link ready to run at full capacity.