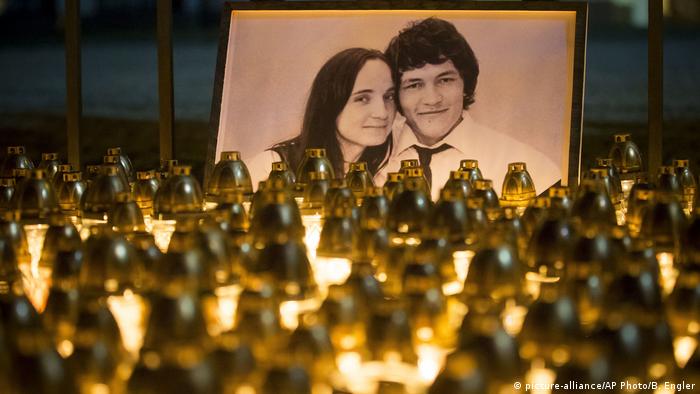 The Supreme Court of Slovakia added two years to Miroslav Marcek's 23-year prison sentence for the double murder of investigative journalist Jan Kuciak and his fiancee Martina Kusnirova on Wednesday.

Marcek, a former soldier, was given a more lenient sentence by a lower court in April for confessing to the crimes as well as passing on important information to investigators. Prosecutors challenged the lower court decision. The Supreme Court ruling is legally binding and cannot be appealed.

Previously acquitted millionaire businessman back in court in December

Before his murder, Kuciak had been investigating dubious business dealings between wealthy Slovakian businessmen, high-ranking politicians and Italian mafia clans.

Among those named in a posthumously published article by Kuciak was millionaire businessman Marian Kocner, who is suspected of having ordered and paid for Kuciak's murder.

Kocner has vehemently denied any involvement in the case. He and suspected accomplices were acquitted of such charges in early September for lack of evidence. Prosecutors have appealed the ruling, which the Supreme Court is scheduled to review on December 15-16.

Killings brought down the government

Kuciak was shot in the chest and his fiancee Kusnirova in the head in their home in Velka Maca outside the capital Bratislava on February 21, 2018. The gruesome slayings spurred immediate outrage and sparked mass protests that eventually led to the collapse of the government.

Two other individuals were found guilty for their roles, with one receiving a 25-year prison sentence in September 2019, and another, a go-between, receiving a 15-year sentence in exchange for his cooperation with investigators in December 2019.

Protesters have gathered to call for Slovak Prime Minister Fico and his government to step down following the murder of investigative journalist Jan Kuciak and his fiancee. The president has warned of a crisis of trust.