Skull Photos Unfortunate But No Real Surprise | All of Deutsche Welle′s social media channels at a glance | DW | 31.10.2006

DW readers this week shared their throughts on the images showing German soldiers posing with human skulls in Afghanistan. Most said they weren't surprised by the scandal. 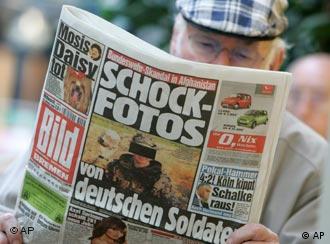 As a veteran of the war in Iraq, I find myself completely unsurprised at these photos. Of course, the photos are shocking and the world has not seen German soldiers acting in such a manner for many years. But is anyone really surprised? To charge someone with moral misconduct in a war, to coin the line from a famous war movie: "is a bit like handing out speeding tickets at the Indy 500". I cannot think of any military in the world that is innocent of such crimes. A proper response should include better training, supervision, and of course, holding those responsible accountable. But to draw any wider conclusions is a hysteric overreaction that belongs in the tabloids. -- Andy J., USA

It is unfortunate the young men posed with skulls, but the fact they were skulls means the bodies were dead before the German soldiers got there, so they did not kill the people. In any case I see no broader implication than that the skulls were there in a former battle zone and they showed disrespect for the dead, friend or foe, whoever they were. -- Donal O'Collaugh, Dublin

I think the German soldiers involved in 'Skull Gate' are guilty of very bad judgment. Still, I think any punishment administered should be somewhat light. I can think of worse crimes than posing with the skulls of those long since deceased. Decapitating a bound and frightened civilian journalist or contractor live on television comes to mind. -- Jeff N. 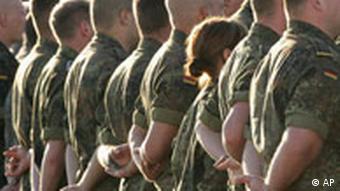 The Bundeswehr has come under scrutiny following the scandal

The German government should handle this affair with their soldiers and the US should mind their own business. -- Joyce Purdue

It is laughable, very laughable and unbelievable the comments of the British and French. For all the atrocities committed by both armies in their territories in Africa they have the audacity to point fingers at Germans? -- Ernst Stetz

Any one who thinks that this is an isolated incident has never served in the military. This happens whenever you dehumanize the opponent. These same atrocities are taking place in all of the NATO and coalition military services. It is a virus that ends up dehumanizing the soldier who does the act and the combatant who experiences the act. After a soldier has done something like this, do you think that he can go back to civilian life and forget this ever happened? -- Lee Cisco

One question for those expressing outrage over the photos -- have you ever been in combat or a war zone for an extended time? Troops all over the world do this kind of thing as a means of relieving stress from being in a hostile environment. If you have a problem, then bring the troops home, and never send them in harm's way ever again. -- Arden Reinhardt Knapp

The German soldiers, who did the disrespectful actions to the dead, should be punished as they don't represent the Germans, they represent the worst of mankind. -- Babiker, Sudan

No matter where you go in the world, there is always somebody who has enlisted as a soldier letting off steam or just showing he is a tough guy, basically being scared like anyone else, but covering up without realizing the cruelty of the prank he performs. One must grant allowances even if their actions are not understandable. Soldiers are soldiers but they are also human beings with all their shortcomings. -- H.H. Fehse

Senior politicians on Sunday said Germany should rethink its role in foreign peacekeeping missions as the scandal over soldiers playing with skulls in Afghanistan battered the army's image. (29.10.2006)

A German newspaper on Saturday published more photographs showing soldiers posing with human skulls and bones in Afghanistan as pressure mounted on the government to find the culprits. (28.10.2006)