Skirmishes as protesters confront neo-Nazi march | Germany| News and in-depth reporting from Berlin and beyond | DW | 25.12.2011

Violence broke out in the German city of Bielefeld on Saturday, where a neo-Nazi march was confronted by anti-fascists. Stones were thrown by a left-wing group, while others tried to storm a police cordon. 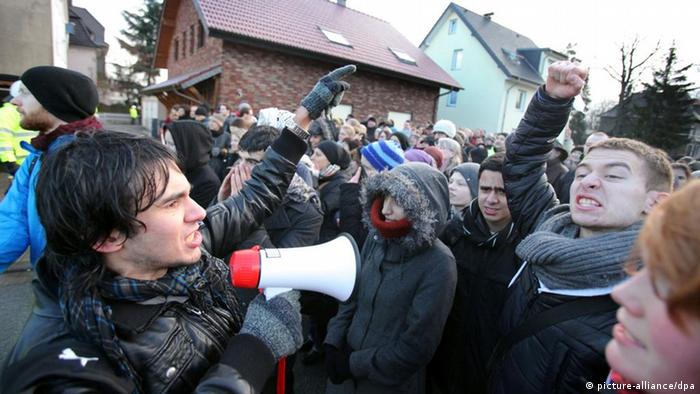 Violence flared after a neo-Nazi march was met with counter demonstrations by anti-fascists in the German city of Bielefeld on Christmas Eve.

Some 6,500 people in total protested against the march, many of them outside Bielefeld Youth Center - a rallying point for left-wing activists and a flash-point for decades between left and right. Rallies also took place at the main railway station and along the route of the march.

Police made efforts to separate the two groups, with anti-fascist demonstrators vastly outnumbering the far-right march members, who were fewer than 70 in number.

However, trouble broke out as breakaway group of protesters pelted the neo-Nazi march with stones from a railway bridge that crossed the route. No injuries were reported.

Some 30 masked activists also tried to break through police lines, with fireworks being lit by some of the demonstrators. Police countered the attack successfully using tear gas and batons, arresting four. 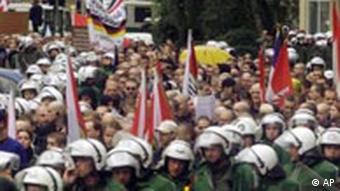 Neo-Nazi marches are often met with strong resistance in Germany

The main contingent of the anti-fascist demonstration - including churches, unions and political groups - staged peaceful rallies under the banner "Bielefeld stands in the way."

"Bielefeld remains a multicultural, cosmopolitan and tolerant city where different cultures and nationalities could live together peacefully as neighbors," said Mayor of Bielefeld, Pit Clausen.

Dean of the Parish of Bielefeld, Regine Burg, called the march a "deliberate provocation" and said the march should be countered "non-violently but strongly."

The officially approved march, which stretched only about one kilometer (0.6 miles), had been requested by members of the far-right from the state of North-Rhine Westphalia.

It was held after a similar march, over the summer, had to be called off by the police on security grounds.

Two decades after the fall of communism in Poland, extreme-right organizations have gained support, and violent attacks on minorities are not uncommon. Critics claim more needs to be done to tackle the threat. (24.12.2011)

Hungary's far right has long viewed the Roma as being to blame for many of society's ills. With foreign capital considered a new enemy at a time of economic crisis, the extremist Jobbik Party is gaining support. (07.12.2011)

As new details emerge about a group of neo-Nazis suspected of 10 killings, Germany's main political parties have apologized for the shortcomings of the country's security agencies. (22.11.2011)