The new indictments in an alleged city-wide lead poisoning case follow the charging of three others earlier this year. Residents of the poverty-stricken city of Flint, Michigan, were put at risk for 18 months. 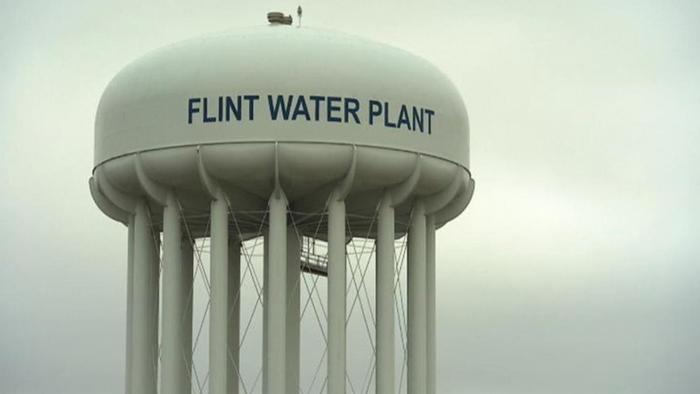 The criminal charges were filed Friday against three employees, each from Michigan State's health and environmental departments, the Flint Journal newspaper reported.

In a news conference later Friday, Michigan Attorney General Bill Schuette said the six had "attempted to bury or cover up, downplay or hide information that contradicted their own narrative."

US President Barack Obama's gesture came amid a scandal involving lead-tainted drinking water. He blamed a widespread ideology that "less government is better" for the problem. (05.05.2016)

How austerity poisoned the people of Flint, Michigan

The birthplace of General Motors has long struggled with joblessness, poverty and crime. Now, the people of Flint, Michigan are facing a health crisis created by the state's attempt to save money. (22.01.2016)

Tests are needed to ensure that toxins from algae are out of the water supply in Toledo, Ohio. The US city's mayor has instructed the 400,000 people in the affected region to avoid drinking tap water for a second day. (03.08.2014)

The charges refer to an 18-month period, from April 2014, when the city of Flint - under control of a state-appointed emergency manager -switched its water supply from Detroit's municipal system to the Flint River while a new pipeline was being built. Authorities had said it was vital to switch the supply to save public money.

The river water was more corrosive than the usual supply, causing more lead to leach from the city's aging pipes. Dangerously high levels of lead were discovered during blood tests of local children.

E. coli and high levels of a disinfectant byproduct were also detected, and local residents complained about the color, odor and taste. A General Motors plant stopped using the water just six months after the switch because it was rusting engine parts. Experts also suspect a deadly Legionnaires' disease outbreak was tied to the water.

The new charges come after three state and local officials were ordered to face criminal charges in April over the scandal, although charges against one of the defendants were later reduced in a cooperation deal with investigators.

The two remaining officials from the earlier investigation, from the state Department of Environmental Quality, face charges of misconduct, conspiracy and tampering with test results.

Flint, which lies about 90 kilometers (55 miles) north of Detroit and has a population of about 100,000, changed its water supply back 18 months later.

In May, US President Barack Obama visited Flint to reassure residents about the state of the water supply. But to this day, some doctors in Flint are still recommending bottled water for pregnant women and young children.