A court has found six former Deutsche Bank employees guilty of enabling tax fraud within the carbon emissions certificate trading scheme. One of the bank's former employees has received a three-year jail sentence. 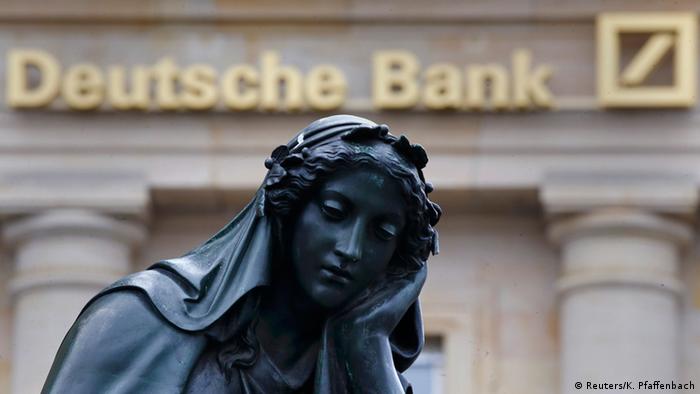 The Frankfurt Regional Court has convicted six former employees of Deutsche Bank for tax fraud in a case worth millions of euros.

Deutsche Bank hasn't done enough to prevent its accounts from being misused to launder money, circumvent international sanctions or even finance terrorism, the UK's financial regulatory agency has found. (02.05.2016)

The court found the former bank employees played an important role in carousel fraud perpetrated by an international gang who stole around 850 million euros ($956 million) between 2009 and 2010. A seventh employee only potentially faced probation.

The court found that the 55-year-old manager beat down growing suspicion of fraud by CO2 emissions certificate traders, with whom the bank was in business.

Heinz H. was a "perpetrator, not just an accomplice," and is responsible for tax-related damages amounting to 145 million euros, Bach said.

The banker coordinated the emissions trade in Germany for Deutsche Bank, and the only one of the seven defendants who pleaded not guilty.

The remaining accused – employees from the trade and the legal departments, and former corporate customer advisers, were put on one-to-two years probation and were fined up to 200,000 euros. Their offices were searched in a large-scale raid in April 2010.

The court decided on a lighter sentence than that demanded by state prosecutors, who called for jail sentences of two-and-a-half to three years for the defendants.

The bankers had been on trial since mid-February. Deutsche Bank cut off ties with the employees in 2015, one of them is already retired.

This case of carousel fraud is believed to have had its peak in autumn 2009 to spring in 2010. Investigators said emissions certificates were purchased abroad through German corporations and sold to intermediary firms within the country, without paying value-added tax. The last company in the chain would dispose of the certificates abroad, and collect reimbursements on VAT that it had never paid.

Emissions trading was introduced as a tool to incentivize the reduction of emissions by companies. Companies purchase certificates allowing them to emit certain amounts of CO2, and are able to sell them, if more environmentally-friendly production means they don’t use up the amount of C02 emissions allotted to them by the certificates.

The investigation into the tax fraud has been ongoing for years. Deutsche Bank itself has not been held accountable. It has repeatedly said that it had been cooperating with investigators, and that it had immediately put a stop to such operations as soon as they had been discovered, and that the money has been paid back to the relevant authorities.

Deutsche Bank is in freefall

Once mighty, Deutsche Bank is in freefall