More and more money is going toward the world's militaries, with the US and China leading the way. But no other top-spending country has increased its military expenditure year-over-year as much as Germany. 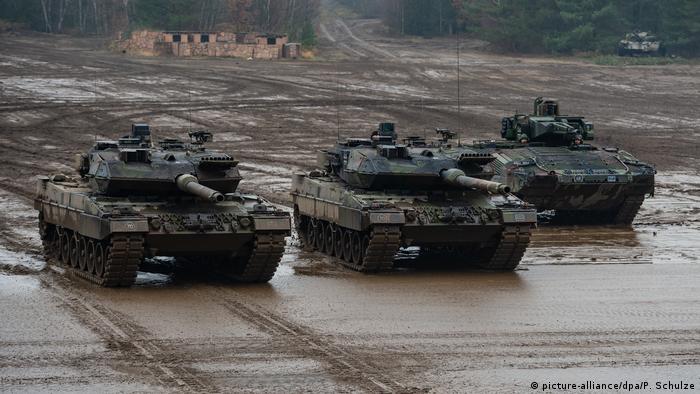 Global military expenditure reached $1.9 trillion (€1.7 trillion) in 2019, the highest annual sum in real terms since 1988. That sum marked an increase of 3.6% over 2018, the largest annual increase since 2010, according to the latest figures from the Stockholm International Peace Research Institute (SIPRI).

In Germany, spending rose by 10% to $49.3 billion — the largest defense budget increase among the world's top 15 states when it comes to military expenditures.

"There's been pressure on Germany to increase its military expenditure since before the Trump administration," said Max Mutschler from the Bonn International Center for Conversion (BICC), a peace and conflict research institute. "The impact of this pressure is now becoming clear. However, one has to say that expenditure is still well below the 2% mark."

At a NATO summit in Wales in 2014, members agreed to meet a goal of spending at least 2% of their GDP on defense within the next decade. Last year, Germany's military expenditure amounted to 1.38% of its GDP.

Russia seen as a growing threat

NATO commitments aside, SIPRI researcher Diego Lopes da Silva also attributed the increase in Germany's defense budget to the geopolitical situation in Europe and the fact that, "Russia is once again being considered as more of a threat." In 2019, almost 4% of Russia's GDP went to military spending, amounting to $65.1 billion.

Da Silva pointed out that Germany is not alone, and that many other NATO states are monitoring developments in Russia with a watchful eye. 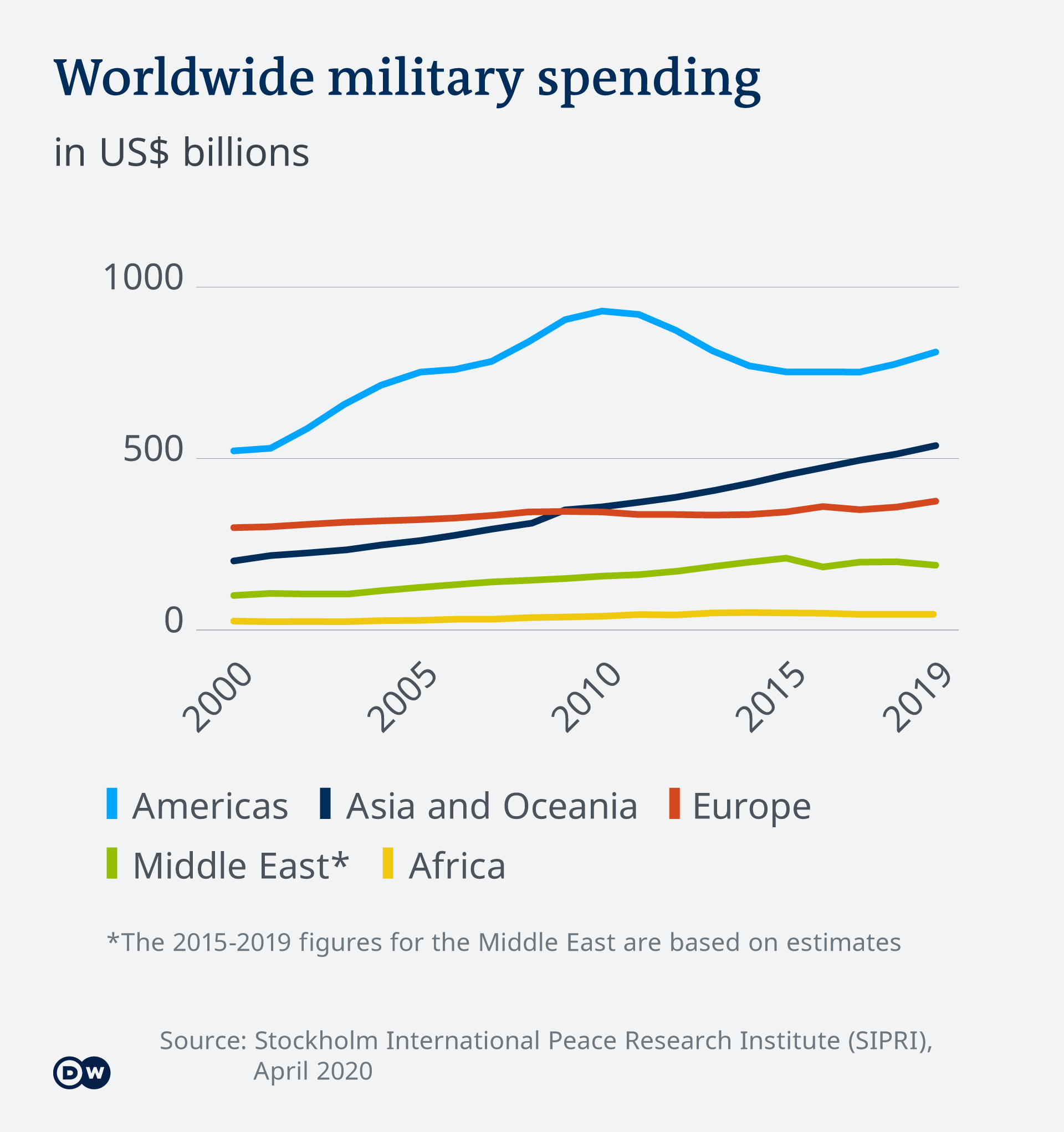 Read more: NATO and Russia: Maneuvers and countermaneuvers in the Baltic Sea

Of the 15 countries in the world with the highest defense budgets, six are NATO members: Canada, France, Germany, Italy, the United Kingdom and the United States. Their combined military expenditure makes up for almost half of the world's total figure. In 2019, the total military expenditure of NATO's 29 member states was some $1.04 trillion, a figure that didn't surprise Mutschler.

"Military expenditure is based on worst-case scenarios," he told DW, explaining that while the public often perceives economic conflict between states to be in the foreground, the threat of military conflict remains very present in the background.

"With regard to the tension between the US and China, we do not know if there will be an armed conflict or not. So the militaries in both countries are preparing for this eventuality, and they're very good when it comes to lobbying for more funds," he said.

US still well ahead of China

According to the SIPRI report, in 2019 the US was responsible for 38% of global military expenditure, totaling $732 billion. The increase over its 2018 budget alone amounted to the equivalent of Germany's total expenditure in 2019.

Those funds went to cover some 16,000 extra military personnel, along with the modernization of its conventional weaponry and nuclear arsenal. But experts also see the increase as a response to China, which ranks in second place after the US when it comes to military spending. Beijing's budget contributed 14% of global military expenditure in 2019 and rose by more than 5% to $261 billion.

China has been increasing its military expenditure steadily since 1994, but its budget has jumped by 85% since 2010. However, in terms of percentage of GDP, this has not changed considerably and almost always lies at 1.9%. 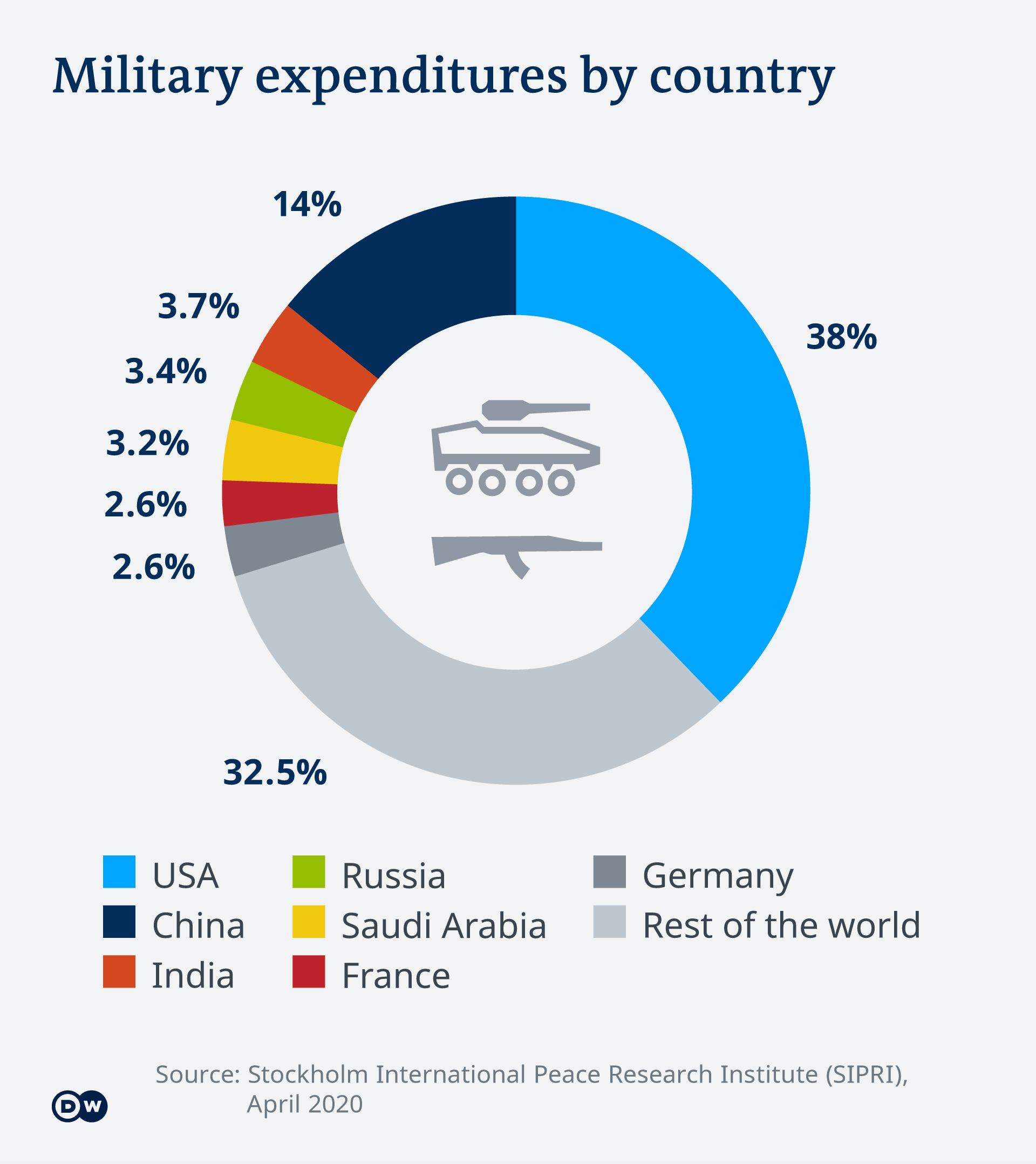 On the Asian continent, the military expenditure of China's rival, nuclear power India, is also considerable, rising last year by almost 7% to $71.1 billion.

"The tension with neighboring countries Pakistan and China are the main reasons that the Indian government has increased its expenditure so dramatically," said Siemon Wezeman, a senior researcher with SIPRI.

For its part, Saudi Arabia lies well ahead of other Middle Eastern countries, spending $61.9 billion in 2019 — though this was actually a 16% decrease in comparison with the previous year. The figure was a surprising development, according to the SIPRI report, considering the Saudi kingdom's ongoing military operations in Yemen and increasing tensions with Iran.

Military expenditure in other countries pales by comparison to the global top spenders. South American states spent "only" $53 billion in 2019, and Brazil alone was responsible for half of that.

Southeast Asian countries totaled around $41 billion, and the entire continent of Africa spent some $42 billion, though there were considerable fluctuations depending on the states. Uganda, for example, increased its budget by 52%, while Burkina Faso decreased its expenditure by 22%.

The authors of the SIPRI report attributed the differences in expenditure to the current geopolitical situation in sub-Saharan Africa, and whether or not states are directly involved in a military conflict.