R&B singer R. Kelly has been taken into custody in Chicago and accused of multiple counts of sexual abuse of minors and child pornography. An attorney representing victims said the singer's "day of reckoning" had come. 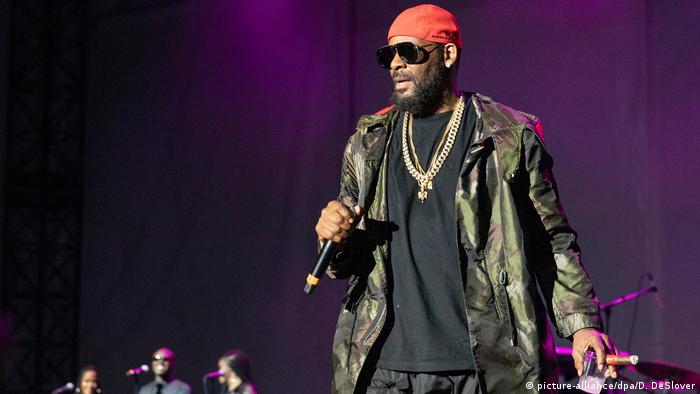 R&B singer R. Kelly was taken into custody on Friday night at a Chicago police precinct in the US state of Illinois on Friday with multiple counts of aggravated sexual abuse involving four victims, including at least three between the ages of 13 and 17.

The 52-year-old singer was driven to the police station in a dark colored van with heavily tinted windows.

The American musician was charged with 10 counts on Friday by Cook County State's Attorney Kim Foxx and ordered to appear in a Chicago court on March 8.

The singer-songwriter has long been plagued by sexual abuse allegations involving sex with minors and child pornography.

"After 25 years of serial sexual abuse and assault of underage girls, the day of reckoning for R. Kelly has arrived," said prominent attorney Michael Avenatti, who is representing several clients linked to the singer.

Avenatti recently said that he had provided prosecutors a videotape of the R&B star having sex with a minor.

The singer who was acquitted of child pornography charges has consistently denied any sexual misconduct.

"He is extraordinarily disappointed and depressed. He is shell-shocked by this," Steve Greenberg, Kelly's attorney, told The Associated Press.

R. Kelly's response in January was to post a 19-minute song to Soundcloud with the title "I admit," which acknowledged "some mistakes and ... imperfect ways," but which also said he had been neither convicted nor arrested, and said some fans "abandon me 'cause of what you heard."

The singer was previously charged with a sex crime in Cook County but was acquitted of child pornography charges in 2008. That case centered around a 27-minute tape alleged to show R. Kelly having sex with an underage female.

In 2017, a campaign was launched in the US calling on people to #MuteRKelly. Last year, Spotify announced it would drop the singer's music from its editorial and algorithm playlists as part of its Hateful Content Policy.

In Germany, where R. Kelly concerts were scheduled for April, a petition was launched calling for both concerts to be canceled. The petition argued fans should not "give sexual offenders a stage." Almost a quarter million people had signed the petition by Friday and concert tickets were still on sale.

Pope Francis has convened a sexual abuse summit in Rome. The string of scandals around the globe involving priests abusing children has shaken the Catholic Church to its core. (21.02.2019)

Almost a terabyte of evidence in a child pornography case went missing while in police custody in the town of Detmold. Local officers are under investigation, with one official describing the situation as a "disaster." (22.02.2019)