A Land Imagined, a thriller by Yeo Siew Hua of Singapore, has won the top prize at the Locarno Film Festival. The film contrasts Southeast Asia's rich hub with the exploitation of impoverished migrant workers. 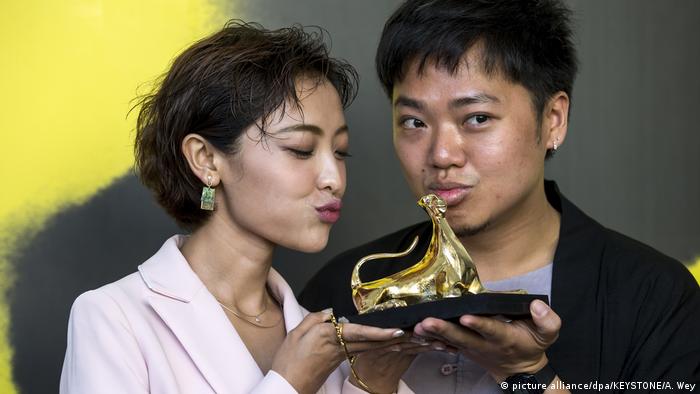 A thriller/love story about modern slavery and a migrant Chinese construction worker who vanishes in Singapore has won the Golden Leopard (Pardo d'oro) for best film at the Locarno Film Festival in the Italian-speaking Swiss resort popular for its outdoor screenings.

Director Yeo Siew Hua (top photo, right) said he had set himself the complicated cinematic task of showcasing the "people I needed to represent in Singapore" by depicting "their dreams, their fears, their love, their pains and their joy."

A Land Imagined — financed by producers from Singapore, France and the Netherlands — was chosen from among 15 international entries at Locarno's 71st contest by a five-member jury chaired by Chinese director Jia Zhang-Ke.

Filmmaking in Southeast Asia was "still very young," Yeo said, adding that he had been inspired by the "great masters from Taiwanese cinema's new wave."

The public prize, awarded outside the main contest and screened on Locarno's Piazza Grande, went to BlacKkKlansman, an anti-racism satire directed by Spike Lee that was previously a hit at Cannes.

Locarno's Leopard for best direction went to Dominga Sotomayor for Tarde para morir joven, (Too Late to Die Young), her feature film set in 1999 about a small community trying to live in a utopian world after Chile's dictatorship.

"I wanted to explore the complex relationships between generations and classes," Sotomayor said, "to capture the wisdom of children, the clumsiness of adults, the strange melancholy we grew up with."

The award for best actress went to Romania's Andra Guti for her depiction of a rebel teenager in the adolescence drama Alice T., directed by Radu Muntean.

The award for best actor went to Ki Joobong as an ageing poet in the South Korean film Gangbyun Hotel (Hotel by the River).

The Special Jury Prize went to director Yolande Zauberman of France for her documentary film M, which examines child abuse in an ultra-Orthodox community in Israel.

The jury's Special Mention went to Ray & Liz by British director Richard Billingham about childhood neglect in a suburb of Birmingham.

Locarno's prize for the best debut film went to Alles ist Gut (All Good), a story about a young woman in an existential crisis by the German author and director Eva Trobisch, who also scored at the 2018 Munich Film Festival as best new talent director.

"It is truly a good feeling when the topic that drives and interests you also appears to interest and motivate others," Trobisch said in Locarno.

Locarno's Artistic Director Carlo Chatrian, who has directed the Swiss film festival since 2013, is set to become one of two co-chiefs of the Berlinale film festival in 2020, alongside German film promotion director Mariette Rissenbeek.

Dieter Kosslick, who has led the Berlinale since 2001, is being replaced in 2019 by Locarno's artistic director, Carlo Chatrian, and Mariette Rissenbeek, managing director of German Films. (20.06.2018)