All passengers and crew are safe after one of the plane's engines burst into flames at Changi Airport. The Milan-bound jet had turned back hours into its flight following an engine warning message. 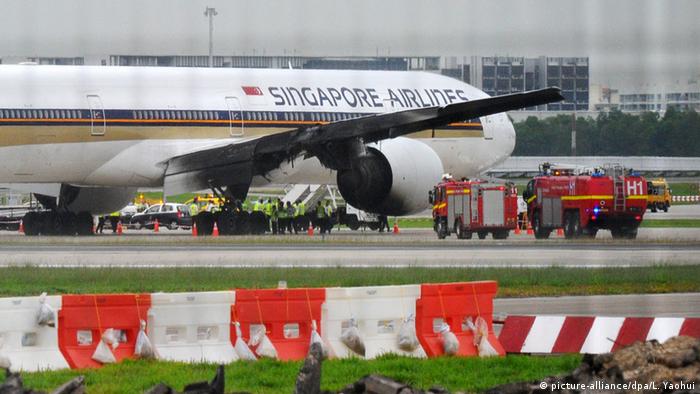 Singapore Airlines said on Monday that no one was injured when the Boeing 777-300ER caught fire after making an emergency landing early in the morning.

An airline statement said Flight SQ368 had been on its way to Milan from Singapore's Changi Airport when it received an "engine oil warning message" that forced it to turn back.

It said the right engine of the aircraft caught fire after the jet landed at about 6:50 a.m. local time (2250 UTC), more than four hours after takeoff.

"The fire was put out by airport emergency services and there were no injuries to the 222 passengers and 19 crew on board," it said.

The local newspaper "The Strait Times" quoted passenger Lee Bee Yee as saying that there had been a slight odor of gasoline in the cabin before the pilots announced that the plane would be returning to Singapore.

The paper said the passengers were transferred to another aircraft that departed for Milan later in the day.

The world's two biggest planemakers have announced only modest orders at the Asian aviation trade fair - a sign of slowing demand after the 2014 show hauled in more than $30 billion (26 billion euros) of deals. (17.02.2016)