Silvio Berlusconi′s party falls into chaos ahead of regional elections | Europe | News and current affairs from around the continent | DW | 10.03.2010

Silvio Berlusconi's party falls into chaos ahead of regional elections

Prime Minister Silvio Berlusconi's party has been excluded from taking part in upcoming regional polls after missing a deadline to submit candidates. A furious Berlusconi blamed the fiasco on judges and the opposition. 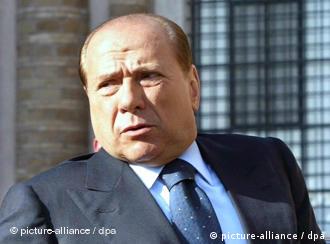 Berlusconi has announced a protest for March 20

Just weeks ahead of regional elections - which Silvio Berlusconi himself called an "important national test" of his support - the Italian Prime Minister's People of Freedom (PDL) party finds itself in a state of chaos.

After a court confirmed that the PDL had missed a deadline to submit its list for the regional assembly in Lazio, Italy's third largest region, Berlusconi held a press conference on Wednesday during which he attacked and blamed the opposition for the pre-election fiasco.

"The behavior of the left has been and remains anti-democratic and wretched, while we have behaved in the opposite way," a pugnacious and visibly fatigued Berlusconi told reporters.

He added that he had "detailed, documented, and certified" proof that opposition supporters purposely prevented PDL candidates from signing up for the Lazio elections by making a "commotion" outside the registration venue that "caused the PDL candidates to go away."

Berlusconi also cast the blame on Italian judges, who he said "in a violent abuse of power" had cast away PDL candidates for not waiting in registration lines correctly.

The pre-election madness all started when the person responsible for registering Berlusconi's party for the Lazio elections missed the deadline because he was "mangiando un panino," or eating a sandwich.

When the courts rejected a first appeal, Berlusconi passed a new law that retroactively changed the election registration rules so that his party could be re-admitted - but not without a near brawl in parliament. 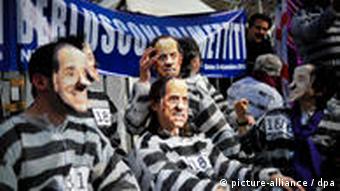 After the Rome court ruled again that the PDL could not participate in the Lazio elections, Berlusconi railed against the judges on Italian television and called on supporters to take to the streets in a huge protest.

Before Berlusconi had even mentioned a date for the protest, his supporters began showing up outside PDL party headquarters with banners reading "Silvio, lead us to the polls!"

Berlusconi has since called for the protest to be staged on March 20. The elections, which are to take place in 13 of Italy's 20 regions, are scheduled for March 28-29.

According to a poll put together by the newspaper La Repubblica, support for Berlusconi's People of Freedom party has sunk to its lowest level since 2008 when Berlusconi began a third term as prime minister.

According to the survey, only around 44 percent of voters have faith in the billionaire media magnate, a drop of over two percent compared to last month's poll.

Tens of thousands of protesters gathered in Rome after a court temporarily adjourned the trial of Italian Prime Minister Silvio Berlusconi, who is accused of bribing his former tax lawyer. (28.02.2010)

Tens of thousands of people have staged a protest in central Rome demanding press freedom in Italy. Demonstrators accused Prime Minister Silvio Berlusconi of trying to muzzle the media. (04.10.2009)