′Significant shortcomings′ in treatment of women refugees and migrants in Europe | Europe | News and current affairs from around the continent | DW | 03.03.2016

With a dramatic increase in the number of female migrants making the dangerous journey to Europe, many have found the EU's asylum policies lacking when it comes to their treatment. Martin Kuebler reports from Brussels. 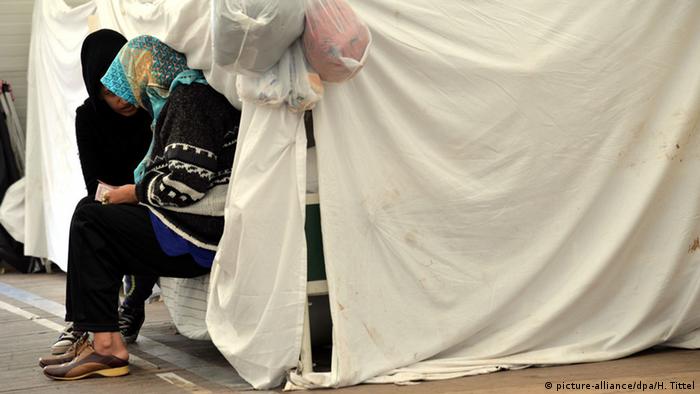 "The need to address the protection afforded to refugee and migrant women and girls on the move in Europe is becoming more urgent by the day," said Mary Robinson, the former president of Ireland, speaking at an interparliamentary committee meeting in Brussels on Thursday.

Robinson's comments came amid reports that the number of female refugees and migrants is on the rise in Europe. In February, the UN Refugee Agency reported that for the first time since Europe's migrant crisis began last year, the number of women and children arriving in the European Union had exceeded the number of men. 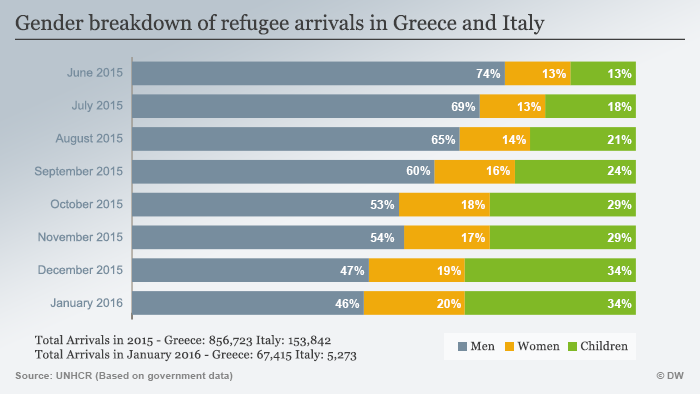 Izza Leghtas, a researcher with Human Rights Watch who in recent months has spoken with refugees at various points along the migrant route from Turkey to Europe, told DW that she'd come across women traveling alone or with children, heading to Europe to join their husbands. Others had left their husbands or other family members behind to fund their journeys to safety from home. In one case, she interviewed a young woman who was eight months pregnant and being held behind bars in a detention center in Hungary.

"One would think that the numbers at this time of year wouldn't be so high, but despite it being winter people are still crossing," she said. "People who I've met have said how they really have no choice, and that's why they're taking these incredible risks."

A German child protection group has called on President Joachim Gauck not to sign Chancellor Merkel's latest measures to tighten asylum law. The two-year suspension of family reunification will harm children, they say. (01.03.2016)

A special plane from Germany carrying rejected Afghan asylum seekers has landed in Kabul. What prospects do these people now have in their home country? DW examines. (25.02.2016)

Labor Minister Andrea Nahles said the funds would ensure other social services were not affected by the increased migration. EU officials are urging member states to do more to deal with people fleeing for Europe. (11.02.2016)

More and more children are traveling alone on the Balkan route for refugees. It is feared that thousands could fall prey to criminals. DW's Nemanja Rujevic reports from Gevgelija. (07.02.2016)

Speaking to journalists on Wednesday, Mary Honeyball, a British member of the European Parliament and a rapporteur for the Committee on Women's Rights and Gender Equality, called for "decent and humane treatment" for these refugees and migrants.

"Often, women will use transactional sex to pay for the journey and various other things, [like passports]," she said. "The journey itself - however they do it - is generally appalling for women. And then they arrive [in Europe] and the conditions vary hugely."

Honeyball's report on the subject released earlier this year pointed out that "very significant shortcomings remain" in the treatment of women refugees and asylum seekers in the EU. The report highlighted a number of urgent issues, including the lack of female interpreters and reception center staff, the need for separate accommodations and sanitation facilities for men and women, protection from abuse in shelters, access to childcare during asylum interviews, counseling for sexual trauma, and health care for concerns specific to women such as prenatal and postnatal care.

"Women are exposed to gender-specific dangers all along the migratory route: they are more prone to gender-based violence at the hands of smugglers, local authorities and fellow travelers, and to trafficking rings," said Catherine Woollard, secretary general of the European Council on Refugees and Exiles.

"That is why it's particularly important that European leaders open safe and legal channels - such as humanitarian visas, better and faster family reunification procedures and comprehensive resettlement programs - so that refugees, and women in particular, can avoid the dangers of the journey."

Leghtas blamed the EU's shortcomings on the months of bickering between member states over refugee quotas and the ad hoc solutions to the ongoing refugee crisis.

"These places are getting completely saturated and overcrowded, and as a result women and children can be made to share accommodations and conditions that aren't allowing for their safety," Leghtas told DW. "Obviously, if there's overcrowding then the normal procedures aren't going to function."

In order for the situation of women to improve, Leghtas said EU member states needed to recognize that a "more equal and fair" distribution of refugees and migrants was the way forward.

"This is not a new situation, it's not a surprise and it's not something that's going to stop, unfortunately," she said.

"We're in this for the long haul. This is not something which will be over tomorrow or even at the end of this year," said Honeyball, also stressing the need for language classes and job training for women. "Many of these refugees will be staying in the EU, so they will need to integrate into their communities."

The European Parliament will discuss the issue and Honeyball's report at its Strasbourg plenary session on Tuesday, International Women's Day, a day after EU leaders meet with Turkey for a special migrant summit. The issue of migration is also set to dominate the agenda at the regular leaders' summit later this month.

Nawal Soufi, a Moroccan-Italian woman known as the "Angel of the Syrians" for her work providing Arabic-language help for asylum seekers through Facebook and over the phone from her home in Italy, also spoke to the assembled parliamentarians on Thursday.

Soufi told of how she'd recently spent five months following asylum seekers on their journeys from Syria, through Turkey and Greece and on into Germany. Speaking through an interpreter, she said that she suffered violence at the hands of two border guards in two different countries.

"The question for [Europe] is where will we go?" she asked. "When we stand in front of the mirror and we ask our conscience … did we do everything that we could do?"