Sierra Leone has lost its fifth local doctor to Ebola. Dr. Godfrey George had driven himself to Freetown after feeling unwell. Sierra Leone's meager health system has just over 100 doctors for its 6 million people. 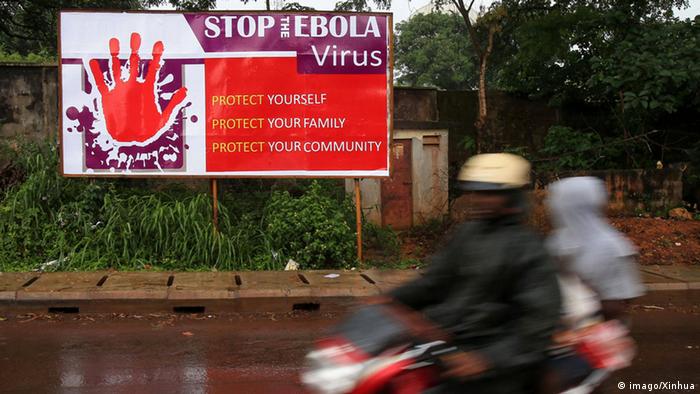 Sierra Leone's chief medical officer Brima Kargbo said Dr. George had checked himself into "the Chinese hospital at Jui outside Freetown," but died of the virus on Monday.

He said the late Dr. George, who was medical superintendent at Kambia Hospital in northern Sierra Leone, might have contracted the virus from a patient he treated for another illness. He had not directly treated Ebola patients.

Although international help is gradually arriving, the head of the UN mission in Sierra Leone, Anthony Banbury, said more assistance was needed. He also urged Sierra Leoneans to stop touching their sick and dead.

"If people do not change their behavior, more people will continue to die," he said.

Even before this year's Ebola outbreak in western Africa, Sierra Leone's medical system lacked basic resources such as protective gloves as it tried to recover from its civil war between 1991 and 2002.

Ebola has killed 100 Sierra Leonean health workers this year, including the five doctors, and as well as nurses and other medical staff.

The World Health Organization (WHO) has recorded more than 4,900 Ebola deaths across West Africa among 13,500 cases of infection.

Liberian Assistant Health Minister Tolbert Nyenswah warned on Monday against complacency, saying although Liberia's outbreak had slowed, "it will not be over until all countries report zero cases for over 21 days."

'Stop the virus at its source'

Ban said the best way to tackle Ebola was to "stop the virus at it source, rather than limiting and restricting the movement of people and trade."

Authorities should regard health workers, whom he described as "extraordinary people," just like anyone else as long they were symptom-free, Ban said.

Singapore media said Monday that the Asian nation would impose visa restrictions on residents from Sierra Leone, Guinea and Liberia from Wednesday.

On Saturday, Canada said it would suspend the processing of visa applications from people who had been in West Africa.

The WHO said Mali appears to be free of Ebola despite the death of an infected toddler from Guinea.

The Africa Cup of Nations, due to be held from January 17 to February 8, will not be postponed because of the Ebola epidemic, the African Football Confederation confirmed on Monday. (03.11.2014)