Beijing is no doubt glad to hear that the new Saudi king has promised to continue his predecessor’s policies. DW columnist Frank Sieren explains. 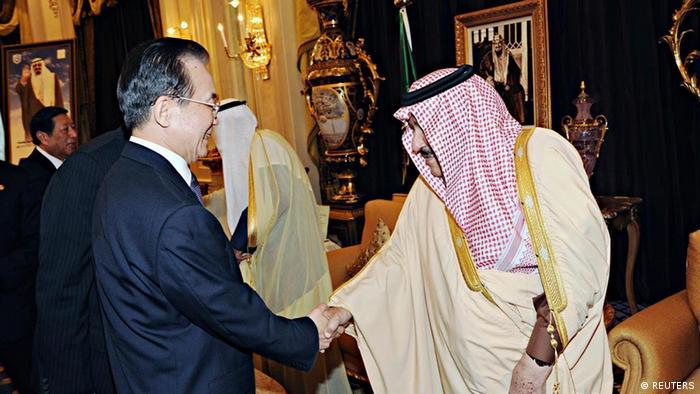 After the death in January of Abdullah bin Abdul-Aziz Al Saud, his brother Salman bin Abdul-Aziz Al Saud ascended to the throne as king of Saudi Arabia. Salman's rule got off to an inauspicious start. He delivered his first public TV address in a voice that sounded reedy, reminding audiences that the 79-year-old is not in the best of health. A ceremony last week in which he was congratulated by the people of Riyadh was also somewhat bizarre: While the Saudi king traditionally shakes hands with the guests who are pledging allegiance to their new monarch, this time the job was performed by doubles standing behind cardboard cutouts, extending their hands through slots. At best this is mere eccentricity. As long as Salman greets state guests in person, the international community doesn't need to get too worried about the new Saudi king.

After all, he wasted no time promising to continue his predecessor's policies. Beijing will have welcomed this news. In recent times, ties between the two countries have been closer than ever, mainly thanks to the efforts of the late Abdullah, who in an effort to drum up support for his pet project in 2006 became the first Saudi monarch to visit China.

Abdullah's goal was to win Asian countries over as the world's biggest customers of Saudi oil. In the past, Saudi Arabia's main customer was the US. But, politically, they weren't easy bedfellows.

For Beijing, with its oil-dependent and energy-intensive industries, this plan came at just the right time. And Abdullah was always good at nurturing good relations with partners who went on to become his country's most important customers. After a major earthquake in Sichuan province, Abdullah did not hesitate long before Saudi Arabia provided more aid than any other country. A year later, Abdullah agreed to a wide-ranging regional cooperation with then President Hu Jintao. Now, when China has problems keeping its oilfields online - as in Iraq where the “Islamic State” is making things difficult for Beijing - Riyadh is the first port of call for advice. There were already clear signs that this would continue under Salman when he - then as crown prince - came together with Chinese President Xi Jinping in Beijing a year ago.

Both sides have agreed to work together on new space travel projects. In addition Xi invited Salman to participate in the new Silk Road project, a global trade network under Beijing's control.

Oil is still the most important factor binding Beijing and Riyadh. With the US increasingly satisfying its own demand for oil domestically, thanks to fracking, and withdrawing from the Middle East in other ways, China is now by far the most important customer for Saudi oil reserves. Last year saw China buy an average of 993,000 barrels per day.

But China will not be as loyal a customer as the US was over the past decades. China has made it clear that it intends to sate its appetite for oil by using suppliers from all over the world, and here politics will play a lesser role than they did for the US. With China, the contract always goes to the best bid. In recent times this was not Saudi Arabia, but sanctions-hit Russia.