Sieren′s China: Military exercises in the Mediterranean | Asia | An in-depth look at news from across the continent | DW | 04.05.2015

Turkey is mulling buying missiles in China and nuclear power plants in Russia. Meanwhile, China and Russia are holding military exercises in the Mediterranean. The West has to get used to it, says DW's Frank Sieren. 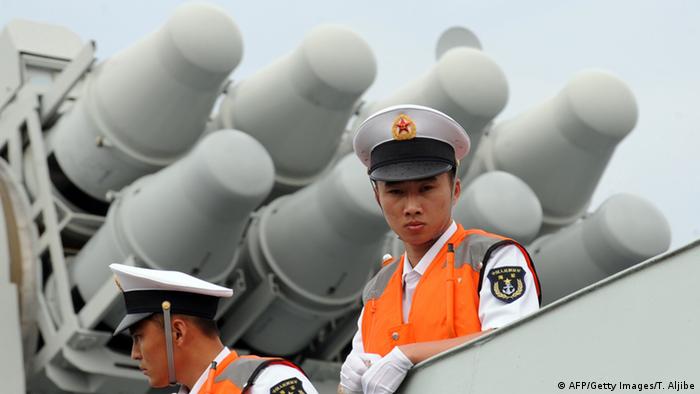 It sounds dangerous to Westerners: For the first time, at the gates of the EU in the Mediterranean, Russian and Chinese military forces are practicing "joint action in distant seas." And they're doing it with live ammunition.

This is perceived as a provocation and a concentrated demonstration of power, but the fact that American soldiers are exercising together with the Philippine army off the coast of China is, on the other hand, viewed as a settled matter.
That maneuver is the largest joint exercise in 15 years and is called Balikatan, which translates to should-to-shoulder in Tagalog. How this is perceived, however, is illustrated by the perspective. Beijing does not find the maneuver any less menacing than the EU finds the Russian-Chinese one.

There are three questions that arise: Are they allowed to do that? Who started it? And most importantly, how can the risks of this development be minimized?

There is a quick answer to the first question: Anyone can practice with whomever they choose in international waters – even with live ammunition. What is new here is that the US is no longer the only global player that can afford to do this, as there are now others, like Russia and China. In the case of the Philippines, at least a neighboring country has asked the USA for support. Russia and China do not have direct access to the Mediterranean. So, in this respect, their maneuver in mid-May is even more irritating, although legal and legitimate.

US aircraft carriers off Chinese shores

Now, for the second question: Who started it? The US has been holding military maneuvers in the Yellow Sea for a long time now. Their aircraft carriers have been criss-crossing off Chinese shores for a while. That's why there are no conclusive arguments as to why the Chinese can't do the same in the Mediterranean, or even off the US coast.

Moreover, Russia and China are announcing their actions right now as a direct result of Western attempts to isolate Russia. With the help of Beijing, Putin is squirming his way out of the Western headlock. No one can yet decide which of the two teams is more dangerous.

In past decades, the US has used threadbare arguments to invade other countries. But for the time being, it seems like the US has quieted down. It is highly unlikely that the US would risk initiating a military conflict with China.

On the other hand, China is full of power and energy, and has had better things to do in the past decades than to march into other countries. To be more specific, China was not and is not in the position to do so. No one can say what would happen if China - after many military exercises - was strong enough. It is highly improbable that China would risk getting into a conflict with the USA. Seeing that, both maneuvers are unpleasant but not very dangerous.

Nobody wants any limits right now

The third question is, nonetheless, essential: How can the risks arising from this development be minimized? The answer is simple: Only if all three stop or at least restrict their maneuvers. But right now, it doesn't look like that will happen. The multipolar world order becomes even more complex when states that geographically fall between two stools no longer want to commit to one side. One example is Turkey. Ankara is constantly letting decision deadlines fall through but then it doesn't rule out buying Chinese missile systems, even though it is a NATO country.

Of course, the reasons are not only because they are 600 million euros cheaper than European and American competitors, or because a part of the production is to be transferred to Turkey.

Behind this are also political considerations: Ankara is buying itself a little more neutrality. What is clear to the Turks in these circumstances is that their status as a regional power between Asia and Europe can be maintained and developed with more than just their partners in the West. Thus, Turkish President Recep Tayyip Erdogan did not say "stop" when the US president specifically requested him not to buy Chinese weapons systems.

Turkey does not want to solely rely on the West

In recent years, Turkey and China have continued to expand their bilateral trade. And this tendency has indeed been accelerated by Western policies, as is the case with Russia. The EU does not see any chance of Turkey becoming a member state. If Brussels is convinced of this decision, it should, however, not be indignant about the fact that Ankara is trying out other options: Rejecting someone, but at the same time demanding fidelity, is asking for a bit too much. China is not the only one on the list of Ankara's new best friends. During the Ukraine crisis, NATO member Turkey decided not to participate in sanctions against Russia.

Quite the contrary. Both countries have recently concluded a large trade agreement. Among other things, Moscow wants to help build the first nuclear power plant in Turkey.

Furthermore, Turkey now purchases more than half of its natural gas supplies from Russia. In Ankara, the prevailing mentality values alliances that pay off in the form of economic growth much more than a harmonious NATO alliance from which the country has hardly benefited at all in the past 50 years. That is why Turkey, at least, will not protest against Chinese and Russian maneuvers and this will send a signal to other Mediterranean countries.

E-cars haven't yet properly caught on in China. But the government wants e-cars on the roads - and e-car makers who establish early dominance in China's market will win big, says DW's Beijing columnist Frank Sieren. (29.04.2015)

The economy is on the rise in southern China, but there is still a shortage of labor. Illegal workers from neighboring countries are filling the gap - but only for now, says DW columnist Frank Sieren. (28.04.2015)