Sieren’s China: Despite falling prices, the Chinese property market is in safe hands | Asia| An in-depth look at news from across the continent | DW | 25.02.2015

Sieren’s China: Despite falling prices, the Chinese property market is in safe hands

The continuing slump in the Chinese real estate market might look alarming, but Beijing is keeping a close eye on developments. DW columnist Frank Sieren is confident there is nothing to worry about. 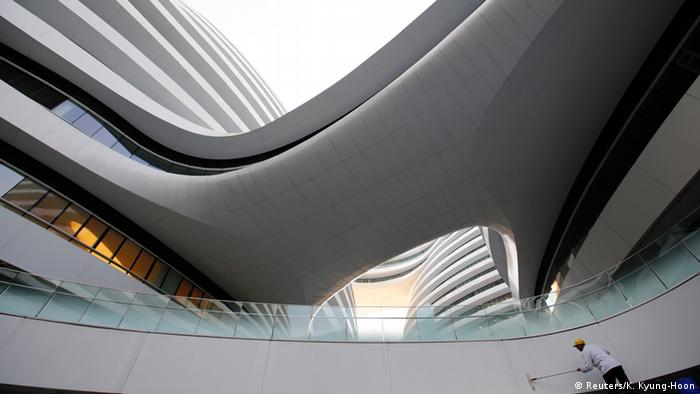 Beijing has a list of the 70 major cities in the country that helps it keep a close eye on the real estate sector. About a year ago, a few figures slid into the red after three decades of steady growth: real estate prices in three of these cities started to fall.

At the time, no one was overly bothered. Even when the same thing occurred in another five cities the following month, no one was worried. But by May, prices were plunging in 35 cities and China's property market was officially in a slump, amid mounting warnings of another global financial crisis. Right now, prices are dropping in 64 of China's 70 major cities, and even the wealthiest of them, Beijing and Shanghai, are seeing a slight downturn.

What does it mean? The fact that prices have been falling steadily, but relatively slowly, across a period of nine months indicates that this is no real estate crash but the government deliberately taking some of the pressure off the market. State banks now have to be more cautious about approving loans in the construction sector; in Beijing, married couples and singles may no longer own more than two homes and also have to make a down payment of 50 percent of the price. In the past, there was 100 percent home loan financing.

Cautious moves to steady the market

These measures are now ensuring a slow but steady reduction in property prices. A short sharp shock to the construction industry and property owners who thought they'd invested safely wouldn't help the government much. No one stands to gain from construction companies being unable to pay back loans from state banks and the state having to step in to help them out – a lesson that Beijing learnt from the US financial crisis. China's districts also rely heavily on a continued construction boom, with real estate sales accounting for some 60 percent of local government revenue.

The real estate sector contributes a third of China's economic performance. Major building projects mean business, and not just for the construction companies. Machinery needs to be bought; steel and cement; furniture and fittings. Ultimately, the government cannot afford to let turbulence in the property market trigger some kind of chain reaction that jeopardizes the whole economy. Prices need to fall and stabilize, but quietly and calmly. There's nothing the government fears more than public anxiety about a real estate bubble.

This doesn't mean that in future Beijing will come to the rescue of any old property developer who got greedy and ran into trouble. But even if the government doesn't bail out every floundering business but leaves them at the mercy of the market, there is unlikely to be a property market crash such as the one that hit the US in the last decade.

Even if property prices are down in China, there is still plenty of scope for clever property developers: In the next few years, Beijing wants more than 260 million people to move from rural areas to the cities. They will need somewhere to live. And as always when it comes to property, location is everything. For now, any property inside Beijing's 4th Ring Road is worth its weight in gold.

The issue of land disputes has taken center stage in China following protests in several parts of the East Asian nation. Beijing now plans to implement new guidelines for the use of land. DW examines. (11.02.2015)

China's economic reforms come at the cost of slower growth

China has reported weak first-quarter growth as the country is in a reform process to make economic expansion more sustainable. Market pundits said the latest figures would be unlikely to lead to more stimulus programs. (16.04.2014)