Chinese students study themselves mad before the "gaokao" test for university entrance. It is mainly the losers in the world's largest academic exam who criticize China's education system, says Frank Sieren. 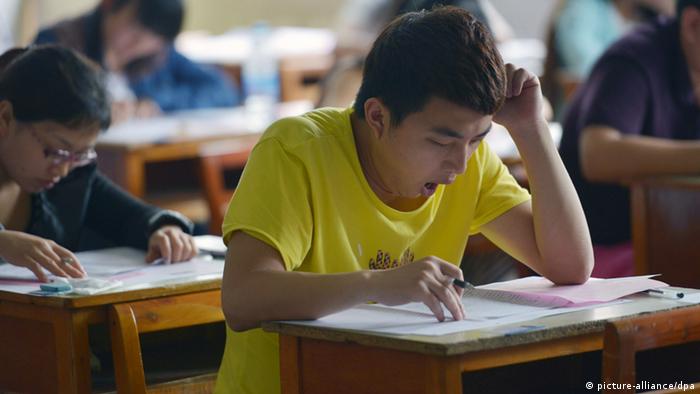 Nine million students took their college entrance exams in the beginning of June, once again throwing China in a state of emergency. One cannot overstate the importance of the "gaokao," China's university entrance exam.

Translated as the "high exam," it determines the fate of every Chinese student. Those who score well can look forward to invitations from the country's best universities. The big advantage of the system is that the exam is open to every student who qualifies to take it - and that it is also extremely difficult to gain access to the system through personal connections or bribes.

Among emerging countries, China's gaokao system offers the greatest equality of opportunity. There are not enough ways to praise these advantages when compared to other systems. For instance India's, where the caste system blocks the upward mobility of so many talented people from the very start. In some other countries students may be disadvantaged simply because their region has poor schools.

The importance of the two-day test for the Chinese is evidenced by the excitement that accompanies it. The best example this year is Peng Chao, a young man who has become somewhat of a national hero over the last few days. Peng, who lost both of his arms in an accident at the age of six, wrote the exam with his feet. His above average score, 603 out of a possible 700 points, not only earned him national media attention, it also guaranteed acceptance at the university of his choice.

Beyond this heartwarming story, students' attempts to cheat on the gaokao and the defensive safeguards against such cheating have also made headlines. In one scandal, uncovered by a journalist from the Jiangxi province, high school students paid university students take the exam for them. Examiners also employed an odd array of defensive mechanisms to thwart many other types of cheaters. Metal detectors were the most harmless among them. In one province, students had to wear cardboard boxes over their heads to keep them from being able to copy from other students seated near them. This year, there was also aerial support: drones flew over test centers and their surroundings in order to intercept suspicious radio communications, ensuring that no one could receive information though earbuds.

Indeed, some students were as creative in their attempts to cheat on the gaokao as others were in answering the actual questions. But the risk to cheaters is high. Anyone caught is immediately ejected from the exam and is not allowed to retake it, and thus cannot attend university in China. The only available option is to study at a foreign university, that, however, is too expensive for most students.

Such a willingness to take risks says a lot about the weaknesses of the system. The biggest is that one single test can decide the fate and upward mobility of an entire family. That is pretty harsh.

There are also only about 6.5 million university openings for the 9 million students who graduate from Chinese high schools every year. So one-third of those graduates won't make the cut. More and more students, as well as parents, have also begun to criticize the pressure involved in taking the gaokao exam. Some students study day and night for months to prepare for the exam. Beyond that, the test also rewards those students that are proficient at memorizing answers.

Major rung on ladder to success

Yet, even those who make the cut still haven't arrived at the top. Only the very best are admitted to the C9 league.Much like the American Ivy League, the C9 is a group of nine distinguished universities. Degrees from these universities are worth their weight in gold to students' families.

So the gaokao is the key to success, but not a guarantee for it. The elation of having passed the exam is often followed by the sobering difficulty of job hunting after university graduation.

That is why high school students whose parents can afford it, go straight to foreign universities. In 2014, over 240,000 Chinese were studying abroad. The government is trying to integrate the trend into the gaokao system in order to change the fact that right now mainly the wealthy and those who fail the exam study abroad.

The Ministry of Education is working on establishing the international recognition of gaokao results. Until now, these have only been acknowledged by a handful of universities. Often, further tests are required of students, costing Chinese applicants lots of money and routinely taking up to a year of extra preparation time. Beijing wants to make it easier to study abroad, simply because the number of students graduating high school each year is outpacing the number of available openings at qualified Chinese universities.

Chinese politicians and economists are convinced that the economy must be remodeled into an industrial powerhouse over the next three decades. Yet this transformation may prove far more difficult than they imagine. (16.06.2015)

Millions of children have no access to school. But a lack of trained teachers means that even those that do may not be getting the education they deserve. (17.04.2015)

China's education minister has called for strict adherence to communist ideology in university teaching. His remarks come after a number of academics have been dismissed or even imprisoned for their views. (30.01.2015)