Sieren’s China: A slap in the face for Siemens

Chinese trains have become so good that Germany's Deutsche Bahn wants to buy them. According to DW columnist Frank Sieren, the railway can no longer afford to give preferential treatment to German companies. 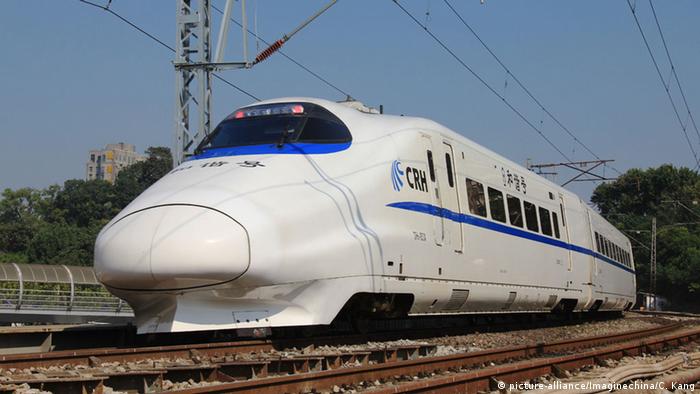 It’s happened a lot sooner than I’d thought. The Deutsche Bahn, Germany's national railway, can no longer afford to buy German or western trains only. It’s opening a purchasing office in China. DB board member Head Heike Hanagarth already says that in three to five years' time China could have a "key position" when it comes to trains and railway technology.

Initially it will be regional trains and locomotives that Deutsche Bahn will purchase in China. But not yet high speed trains. But once DB has established successful business relations with the Chinese, and if price and quality are right, purchasing high-tech ICE trains is sure to be the next step. China’s two state-owned train companies, China South Locomotive & Rolling Stock Corporation Limited (CSR) and China North Locomotive & Rolling Stock Industry Corporation (CNR), could join Siemens as major suppliers to Deutsche Bahn.

TMT, the Chinese provider of railway technology, will now be qualified by the German railway to deliver replacement parts, train wheels, for instance. Many at the Deutsche Bahn were surprised at the media excitement over the new cooperation with China. They point out that for many years slower regional trains and locomotives have been bought from French and Canadian companies, for example. So why not also buy from the Chinese?

However, there is a fundamental difference: while Canada's Bombadier and its competitor French Alstom have reached their zenith, China has turned into a new challenger with a huge home market. Just last year Beijing signed contracts for train projects to the tune of $24.7 billion (22.6 billion euros) outside China. And a few days ago, China Premier Li Keqiang returned from South America with signed contracts amounting to $10 billion to build a train line that will run across South America - from Brazil on the Atlantic, across the Andes, to Peru on the Pacific.

More than ever Siemens can feel its competitors breathing down its neck, even though it currently also delivers technology to Chinese companies. That China is in the process of restructuring its train industry is even more cause of concern. CSR and CNR will merge to become the world leader in train construction. Deutsche Bahn rightly predicts that the Chinese industry alone could meet half of the global demand.

In concrete terms this will mean that China will no longer confine itself to African, South American or other emerging markets, but will also sell trains or build tracks in the highly industrialized nations of the West. China will deliver high speed trains to England and also build the rail network for them to operate on.

The Chinese hold a great advantage: a nation with a large domestic market can offer especially good prices to the rest of the world. And the government supports the endeavor, seeing it as such contracts also boost international prestige - as long as they are no longer limited to emerging countries.

The German government, however, has different priorities: It wants to limit the German railway’s annual deficit as much as possible, because the situation is becoming more difficult. Last year Deutsche Bahn's profits fell by 30 percent, as more and more customers switched to long-distance busses. Waves of train drivers' strikes also do their bit to scare off even the most loyal train users. In turn, the Deutsche Bahn sinks ever deeper into debt.

Those facts and the high mountain of debt, over 16 billion euros, are forcing state-owned Deutsche Bahn to look for reliable partners and opportunities to cut costs sooner rather than later. It’s a political slap in the face for Siemens. At Siemens one can no longer assume that when in doubt German companies will be favored by Deutsche Bahn. Siemens has only one option: its must offer better quality than the Chinese competitors - but at the same price. And that will be extremely difficult. It is very likely that in 2017, when the new fast ICE generation x trains are delivered, this will be the last time Siemens has the lucrative German market all to itself.