A Yemeni athlete competing in Germany's Judo Bundesliga isn't a common occurrence. That's not the only unusual thing about Shugaa Nashwan: The 23-year-old is also blind. 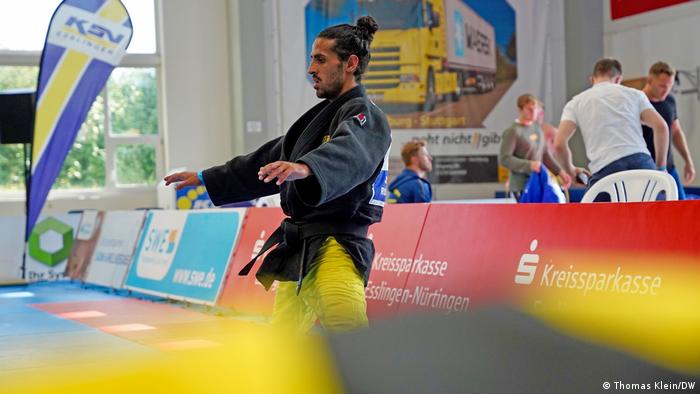 Shugaa Nashwan bobs up and down nervously, shifting his weight from one leg to the other, his hands buried in the pockets of his jogging bottoms.

It's the second day of competition in Germany's Judo Bundesliga in Esslingen, near Stuttgart, and Shugaa's teammates are patiently waiting to have their COVID-19 test results checked before entering the hall.

Finally, they're in, Shugaa feeling his way through the entrance with his cane. The 23-year-old is blind, the only para-athlete currently competing in the league, and it's his first fight.

"When the coach rang me up and asked if I would be available to compete in the Bundesliga, I was ecstatic, and then I panicked," he recalls. "I didn't know if I could do it, but then I knew I would be fine." 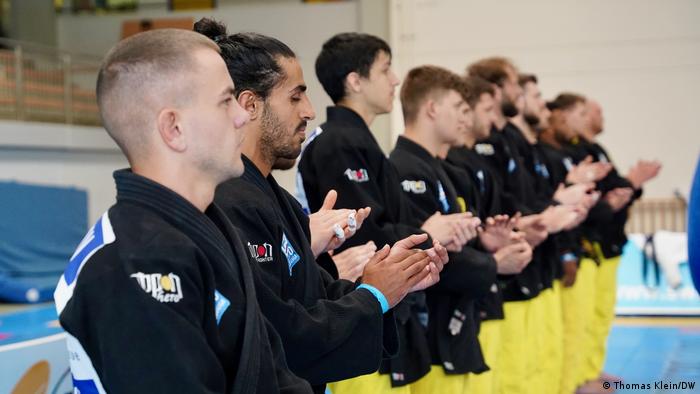 Nashwan (second from left) with his teammates from JC Rüsselsheim

The teams start warming up, some athletes individually, some in groups. Shugaa stands still, his eyes shut, soaking up the atmosphere before he too steps onto the mat.

"I first saw Shugaa fighting at the high school championships in Hanover in 2019," says Andreas Esper, the head coach at Shugaa's club, JC Rüsselsheim. "He came a very impressive third."

For Esper, the fact that Shugaa is blind is irrelevant. "For a nonblind person, it's difficult to comprehend what a mental and physical achievement it is when you can't see your opponent and can only feel him," he explains.

"But, in Judo, a lot of what we do is tactical," he says. "A blind judoka can feel which way his opponent is moving and will try to throw him in that direction."

In this way, Shugaa has developed his unique style.

Together with his teammate Yannick, Shugaa jogs a few laps, stretches and practices a few basic throws to warm up and get himself in the zone.

"Ultimately, it's like a dance in which each fighter has his own style and wants to take the lead," he explains. "And then I have no more restrictions. We grip each other and fight, and my blindness is compensated by other bodily sense. I don't need to see. Many professionals also shut their eyes."

The first matchups are underway, and Nashwan cheers on his teammates with the rest of the squad while waiting for his fight. Yannick stands next to him and describes the action on the mat, so Shugaa knows what is going on. Yannick (right) describes the action on the mat for Shugaa (center)

"I know Shugaa from when we were teammates in Wiesbaden (a city near Frankfurt), and I used to support him then," says Yannick. "But it's not just me. The whole team is there for him."

Shugaa's integration into the team is particularly pleasing for Esper. "Everyone supports and helps Shugaa where it's necessary," the coach says. "That's really cool."

Fighting for his 'judo family'

Nashwan was born in Yemen in 1997, but an eye disease caused his eyes to grow ever weaker, and he moved to Germany for medical treatment at the age of 5 with his father, stepmother and four siblings. Most returned to Yemen soon after but Shugaa remained in Germany with his stepmother, went to a German school and began his judo career. 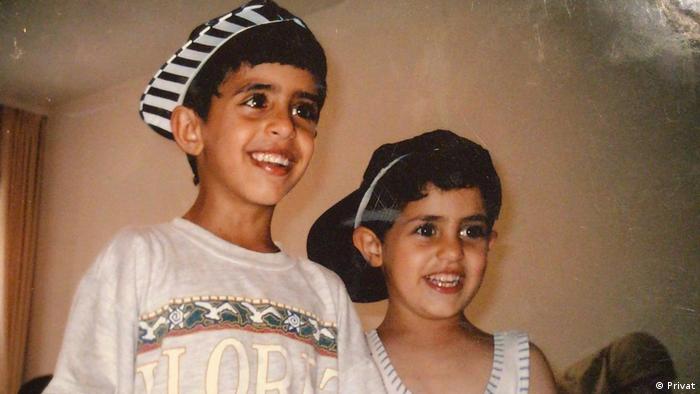 Family: A young Shugaa (left) with his brother Mo

In Marburg, a city in central Germany, Shugaa attended a boarding school for blind and visually handicapped people, where he did his A-levels. His former teacher and judo coach, Markus Zaumbrecher, recalls: "Shugaa was initially quite macho and arrogant, but judo helped him develop more positive traits. He did charity work and learnt to be part of his team, part of his judo family."

But what really made Shugaa stand out was his motivation, and he quickly had success on the mat, even against older fighters.

"He had an unconventional style," remembers Zaumbrecher. "Once, at the German national championships, he pulled off a move that he had never actually learnt before. He just has a real feel for the sport, and he can always surprise you. That's why I believe his has such huge potential."

Ten years later, Shugaa fulfilled that potential by making it into the Bundesliga.

With claps on the shoulder and encouraging shouts from the side, Shugaa makes his way onto the mat.

His opponent is an established Bundesliga fighter, but Shugaa gets off to a good start, managing to fend off his opponent's attacks time and again. Watching on, his teammates sense that he can do more and the encouragement gets louder. Awarded a waza-ari score, the second highest score possible in judo, victory is near. But his opponent manages to free himself and counterattacks, winning with an ippon, the highest score. 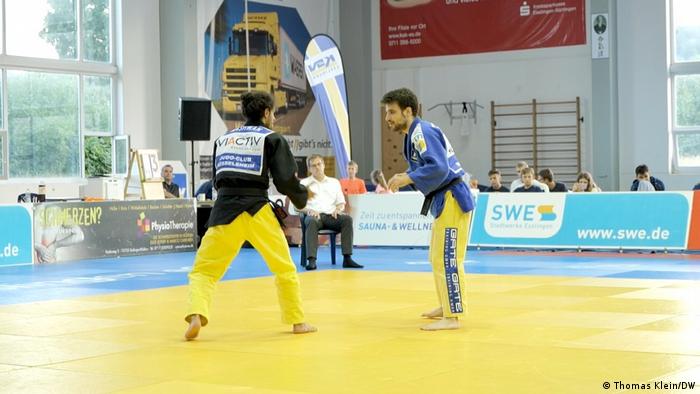 "He's an elite, nonhandicapped, international fighter," says Shugaa with a shrug. "Losing to him is no disgrace." But he's still disappointed.

"It really gets to me because it's such an elemental part of me," he says. "I take these defeats seriously, but I tell myself: 'Hey, you lost, but you're still a strong personality and you're still a fighter.' That's how I approach judo and life in general."

Shugaa has learned respect from teammates and opponents alike, which former coach Zaumbrecher puts down to successful integration.

"There are only two blind judo events in Germany," he explains, adding that it's particularly difficult for blind children to progress in the sport because of the lack of opportunities.

When Shugaa first started out, Zaumbrecher remembers opposition from nonhandicapped competitors and organizers who couldn't imagine that a blind fighter could compete.

"But I told them: 'Let's try it!'" Zaumbrecher says. "And, nowadays, the other teams all know what to respect. Shugaa might not be able to see, but they know he's dangerous."

Shugaa's career is going from strength to strength.

"There aren't many better judokas in his weight class," Esper says. "For me, he's a clear candidate for the Paralympics," he adds.

For Shugaa, other things are more important. "I'm just proud to be part of this team," he laughs.

Iranian Saeid Mollaei just wants to be a judoka and an athlete. He’s had to fight a long time for that status and in Tokyo rewarded himself with a silver medal. His story begins and ends in the Budokan.

Judoka Tohar Butbul finished seventh at the Tokyo Olympics, but his sporting achievement has been overshadowed after Sudan's Mohamed Abdalrasool became the second athlete to withdraw from a bout against the Israeli.