Should penguins be an animal attraction?

Penguins are cute to watch, which makes them ideal candidates for animal attractions. But are the sensitive animals really cut out for life in zoos, spas and entertainment parks?

A group of small honking and flapping penguins gathers around an aloe vera plant in what seems to be the wildlife equivalent of a chat at the water cooler. Others dive into a nearby pool with a splash as some territorial neighbors - two ducks - defend their patch.

The scene is probably a common one in coastal Peru and Chile, the places these Humboldt penguins traditionally call home. But it's the last thing a visitor to a sauna in a small town in rural Brandenburg, around 80 kilometers (50 miles) from the German capital Berlin, might expect to find.

Lübbenau, with its network of canals, is known as the city of punts and pickles. In 2008, the Spreewelten Bad added penguins to its list of attractions. The spa houses 18 Humboldt penguins in a small enclosure equipped with nests, rocks and a pool. Visitors can even swim alongside the penguins - albeit separated by a large pane of glass.

It's breeding time when DW visits, and the expectant mothers are nestled in huts keeping their eggs warm. Fifteen babies are expected, and the fathers are making sure humans and others of their own kind don't get too close. Schäfer says penguins are naturally nervous animals, but adds that those at Spreewelten are in good health - a sign they aren't stressed.

Still, not everyone agrees that penguins should be used as an attraction in entertainment and leisure venues. In 2015, protestors and activists managed to stop an attempt by a water park operator in western Germany to install a similar penguin attraction.

"They are hoping to attract more visitors by keeping those sensitive animals - but everybody should really boycott those kinds of facilities," says Peter Höffken of animal rights organization PETA Germany, which is strictly against keeping penguins in such venues.

The perils of being cute

Penguins are intrinsically amusing creatures, and humans love looking at them. Which perhaps accounts for the fact that they are prime zoo attractions, and also used as a way to pull customers into other venues.

"Penguins are incredibly charismatic," says Stephanie Allard, director of animal welfare for the Detroit Zoological Society. "I think part of it is their aesthetic, the way they look. They look so refined. The whole tuxedo comparison." 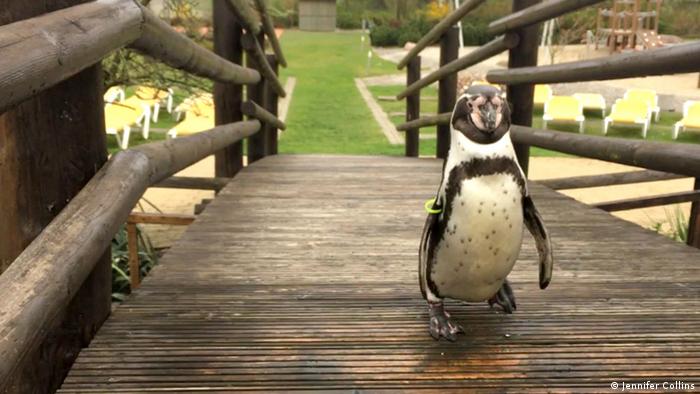 But that means the creatures can end up in some sticky situations. A restaurant in an Indonesian mall recently came under fire for keeping Humboldt penguins in an indoor exhibit. Meanwhile, animal rights groups slammed US hockey team the Pittsburgh Penguins, for using penguins as part of its pre-game entertainment earlier this year.

"When animals are forced to perform in these types of settings, typically their welfare is not at the forefront, and animals that are placed in those situations don't have a choice," says Allard.

Even in zoos, penguins don't always thrive. At the Sealife Center in Scarborough in the United Kingdom, staff resorted to giving Humboldt penguins in their care antidepressants after the animals became so fed up with the English winter's relentless rain and wind.

And since 2011, dozens of Humboldts at the Dresden Zoo in eastern Germany have died from a mysterious infection.

Höffken from PETA says the animals shouldn't be kept in zoos partly because they are extremely sensitive to changes in climate and routine. Stress can lower their immune systems, making them more vulnerable to disease. The situation is compounded if they are kept in poor conditions, he says.

"Usually the penguins are kept in very small enclosures with very small water facilities, so they cannot really show their natural behavior, which they would do in the wilderness," Höffken told DW.

In nature, for instance, Humboldt penguins hunt in groups. The agile swimmers with their torpedo-shaped bodies can reach speeds of 20 kilometers per hour (12 miles per hour) in the water. On average, they dive to depths of 60 feet (18 meters).

Allard agrees that it's important for penguins living in the care of humans to be able to perform natural behaviors, but says that's not an impossible feat if a zoo is dedicated to understanding and meeting their needs.

The Detroit Zoo built a new habitat for its penguins at the Polk Penguin Conservation Center, replacing 6-foot-deep pools with 25-foot-deep ones (1.8 meters and 7.6 meters respectively). When that happened, the animals started spending more time in the water.

"They are not dependent on the water itself to procure their food. We make sure they have all of the food they could possibly need and so they don't need to swim long distances in order to find fish for example," says Allard. "By spending that extra time in the water, they are telling us that this is important to them."

Back at the spa in Brandenburg, Schäfer says they are planning to expand the penguins' living quarters. She is preparing the penguins' meal in a small room beside the enclosure as Flocke - their star penguin - rests on her colleague's feet and enjoys the underfloor heating. 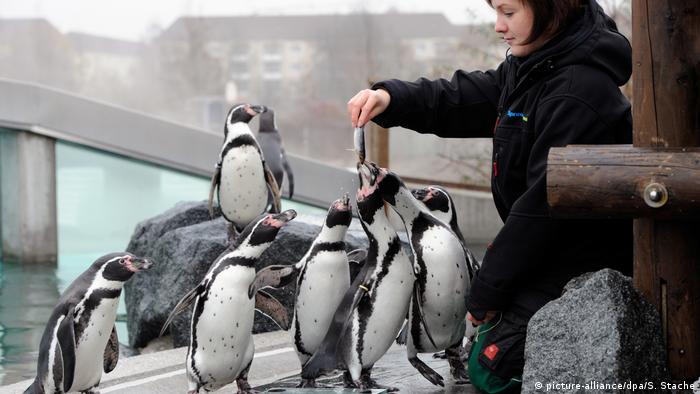 The staff at the Spreewelten Bad is passionate about caring for its penguins but the question remains if the animals should be kept for entertainment purposes in the first place.

"He's very affectionate," laughs Schäfer - who clearly dotes on the penguins - while explaining that they hand-raised him. "He arrives early, wants to be petted and snuggled, and is always running after us. We go walking with him regularly, also in the sauna, and that's an attraction for the visitors."

Outside, Schäfer explains some facts about Humboldt penguins to the crowd watching from behind the glass pane in the heated outdoor pool. A small boy and girl are helping to feed the penguins, who are gulping down herring, capelin, and sprattus, or diving in after fish flung into their water.

The penguins are certainly drawing visitors: Spreewelten says numbers increased after the tuxedo-wearers arrived. "I think it's sweet. It's a nice idea," says 17-year-old Nicole Tarnov, who has visited the spa numerous times. "It's different - otherwise you just see them in a zoo."

But Höffken's advice if you want to see a penguin? "Watch one of the very great documentaries that are made about them."

Where Africa’s Best Footballers Come From