The Germans don't understand what's happening. They're paying to bail out southern eurozone nations, they're getting little in return. So, what if Germany got rid of the euro and left all that trouble behind? 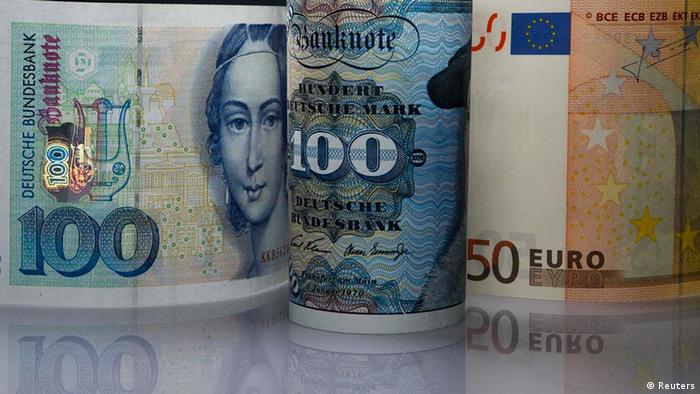 Manfred Neumann, former economics professor at the University of Bonn cautiously brings up a heretic thought. "We must finally start thinking along the lines that we just don't fit in there," he says, referring to the 17-nation eurozone.

For him, it all revolves around Germany's industrial clout. While Germany's industry accounts for over 20 percent of the total economy, other eurozone economies are way behind that: The corresponding figure for France is 10 to 12 percent. While the productivity of German industry has been rising steadily, Italy's competitiveness has been going downhill. "If we continue along this path, our currency needs appreciating, while others outside the bloc may feel growing devaluation pressures," Neumann argues.

Neumann's view is shared by Clyde Prestowitz and John Prout, two economists from the US. In a commentary posted on CNN's web site both wrote that the eurozone does not primarily suffer from its debt load or the economic weakness of peripheral member states, but rather from Germany's pronounced competitiveness.

The two pundits think current rescue attempts have failed because of a fundamental misconception underlying all endeavors to wriggle out of the crisis, notably that weaker eurozone countries should become more competitive though spending cuts and thus become more "German." 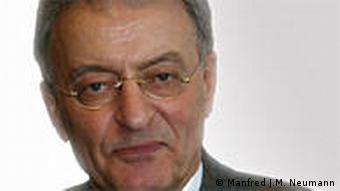 Manfred Neumann thinks Germany is ill-placed in the eurozone

The idea that the industrial Germans are rather out of place in a larger club are not new and were voiced as early as two decades years ago. Back then, the former European currency union was about to be torn apart as the central bank in France was forced to allocate half of its currency reserves to saving the franc. A total of 11 countries pledged to let their currencies fluctuate within very narrow limits.

Since the deutschmark had become the union's anchor currency, other currencies were exposed to heavy devaluation pressures and central banks had to react to that. What followed was a crisis meeting of finance ministers and bankers.

"And France suggested that Germany leave the currency union, taking central bank officials by surprise," Manfred Neumann recalls. The situation was saved by the then president of the Dutch central bank who, like the Belgians later on, said that if Germany left, they would too. It was clear from those statements that the upshot of it all would have been a complete split down the middle of the currency union.

But it didn't get as far as that. Instead, currencies were allowed to fluctuate within much wider limits, which in a way boiled down to the currency union declaring bankruptcy.

Senior German property administrator Jens Ehrhardt predicts that the euro in its current form won't survive either. He told the Handelsblatt business newspaper that the only sensible solution would be for Germany to exit the eurozone. "As a result, the euro would devaluate strongly, giving crisis-stricken southern European nations a chance to become more competitive again," Ehrhardt maintains.

This in turn would mean that the old, new deutschmark would gain massively in value. "A look to Germany's neighbor, Switzerland, shows what could happen", says Wolfgang Franz, a senior economic advisor to the government in Berlin. Exports and the tourism sector there were exposed to such market pressures because of the strong Swiss franc that the central bank introduced a minimum exchange rate of 1.20 francs against the euro. Since then, the Swiss bank has been engaged in a massive currency purchasing drive to curb a stronger franc. The same would happen to the deutschmark, if Germany were to leave the eurozone.

But US economists Clyde Prestowitz and John Prout don't see much harm in that. They agree that such a move would entail a temporary rise in unemployment and dwindling exports. But they hasten to add that that would be the lesser evil financially than a continued and long-term bailout for Greece and other debt-stricken eurozone nations.

Notwithstanding the mixed reaction to the EU summit, European leaders finally took a step in solving the crisis by tackling the EU’s banking problems. Still missing is a path to growth, writes Barry Eichengreen. (03.07.2012)