France's government is trying to imitate Germany - and is facing a lot of resistance for doing so, as evidenced by the current strikes and demonstrations. But maybe Germany isn't the shining example it's set up to be. 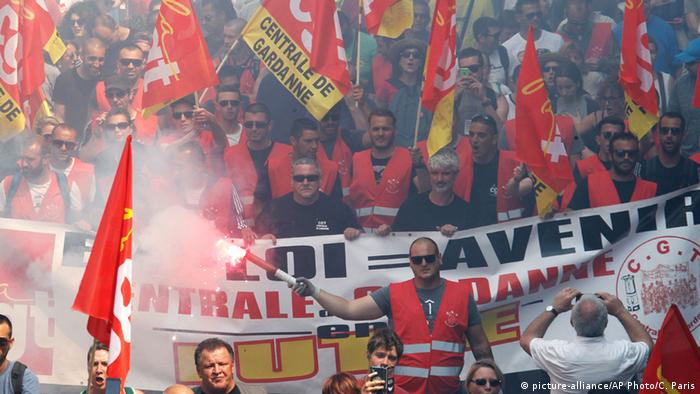 The conflict surrounding the labor market reforms in France aren't going to be resolved quickly. Talks between labor minister Myriam El Khomri and the left-leaning trade union CGT were "productive" but highlighted the dissent between the strikers and the government, according to union chief Philippe Martinez. The union has decided not to cancel the two more days of planned strikes.

France has twice as many unemployed as Germany. It has higher levels of debt, and despite some attempts at austerity, it hasn't managed to adhere to the budget standards laid out in the EU's Stability Pact, because its economy has been sluggish. In contrast, Germany seems to many in France like an economic wonderland worthy of emulation.

There are two fully contrary positions as to how to proceed. President Francois Hollande is dreaming of a reform package in the style of former German Chancellor Gerhard Schröder's "Agenda 2010."

"Are you France's Gerhard Schröder?" a journalist asked Hollande recently. He answered that he would rather be remembered as a president who "implemented reforms, however unpopular," according to the newspaper Le Figaro - in an article about Germany as an example of reform.

Hollande can gauge just how unpopular his plans are by looking at his miserable ratings. The weekslong strikes and demonstrations have also shown him just how difficult it is to push even small reforms through - let alone his own take on Agenda 2010.

But that's exactly what France needs, according to Isabelle Bourgeois of the CIRAC research center at Cergy-Pontoise University northwest of Paris. 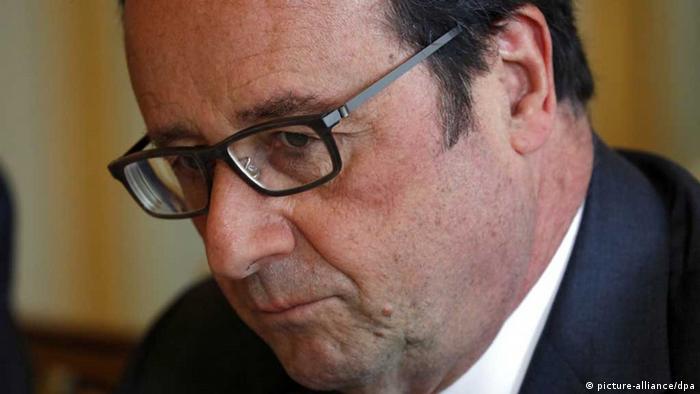 "We need reforms; otherwise bankruptcy is imminent - like in German history," Bourgeois told DW. "Our unemployment benefits, health insurance and pensions all need a solid financing basis. There have to be more contributions by the individual, and the time of eligibility to receive unemployment benefits has to be reduced urgently."

Fewer social benefits and more personal responsibility on the part of the citizens - all that can reduce costs, strengthen companies, and spur growth, at least in theory.

Germany was once also considered the "sick man of Europe" and suffered high unemployment and budget constraints, as France does today. The German unions cooperated with the reforms - and complemented them with wage restraint.

That France has to follow in Germany's footsteps is a very popular notion, not only among French politicians, but within Germany itself, where many think, "They have to power through this - we've managed."

But there's another, fully contrarian view: France's unemployment problem is an imported one, from Germany. That's what left-leaning German paper taz argues in a commentary.

"In the early 2000s, Germany implemented a conscious wage-restraining policy - one could also call it wage-dumping," economist Heiner Flassbeck said in an interview for DW. "That's how Germany managed to create an excellent competitive position for itself within the newly started European currency union."

In the first decade of the currency union, real wages in Germany dropped by 6 percent; in other countries they rose significantly, like in France, where they increased by nearly 10 percent. The result was a growing export surplus for Germany, celebrated as a success story in the country.

In economics, there's the expression "beggar-thy-neighbor." It wasn't coined by leftist economists but by Adam Smith of "invisible hand" fame and a pioneer of political economy. As early as the 18th century, Smith criticized the beggar-thy-neighbor strategy as a cause of international tensions.

In international trade, such advantages peter out sooner or later, as the exchange rate adjusts. Within a currency union, that's not possible.

"One of course has to be competitive. But it's something else entirely to enter a currency union and then undercut others," said Flassbeck, the former chief economist of the United Nations Conference on Trade and Development.

And that's how the euro stayed cheap for Germany and too expensive for France and other countries. In Germany, unemployment shrank, in France it grew. The international financial crisis threatened this fragile fabric even further.

Germany's solo flight has strengthened a development that even Germans are now complaining about, said Flassbeck. That the European Central Bank has not managed to get even close to its 2-percent inflation goal also has a lot to do with Germany's long-term wage restraint policy.

"When you have an inflation target of 2 percent, then you also have to have wage increases accordingly," said Flassbeck. "But Germany has always stayed below that and clearly violated the rules."

That the EU commission has stayed silent on this is a "dramatic failure" in Flassbeck's opinion.

The 2.4-percent increase in real wages in Germany is "laughably small" and would not be enough to help achieve acceptable inflation values, the economist said. The zero interest rate policy of the ECB exists "not because Draghi is playing at insanity," but rather because wages in Germany, and as a result, in other countries, aren't increasing enough.

Germany as the bogeyman

Flassbeck's opinion is hardly a common one. Because Germany is in better economic health than the other euro countries, it's often considered a shining example, also by Germans themselves. They argue that if France, Italy, Spain and the others had only done their homework, then the eurozone would recover more quickly. 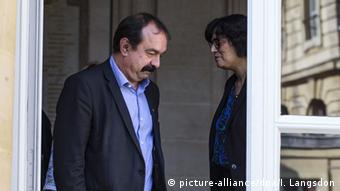 Flassbeck is convinced that if all European countries had done what Germany had in the early days of the euro, then deflation and a zero-interest policy would have set in at the very start.

In France, the left wing of the governing Socialists has refused to accept the German way as gospel.

"They equate Europe with globalization and intense competition pressure from other countries, especially Germany," said Isabelle Bourgeois. "They describe Germany as the bogeyman."

Bourgeois concludes that the Socialists have to split up, in order to push reforms forward. Flassbeck's conclusion looks different: if the Germans don't give way, then the currency union has to fail.

France's prime minister has condemned violence stemming from a labor protest that saw windows at a children's hospital smashed. He called on labor unions to put an end to the protests that have hit France for weeks. (15.06.2016)

Against the backdrop of Euro 2016, nationwide strikes are washing over France as workers protest labor market reforms making it easier to hire and fire employees. Even the Eiffel Tower was closed because of the walkouts. (14.06.2016)