Should Christianity Be Mentioned in the EU Constitution? | Services from Deutsche Welle | DW | 23.01.2007

Should Christianity Be Mentioned in the EU Constitution?

German Chancellor Angela Merkel said she would like the EU's constitution to make a reference to Europe's Christian roots. DW-WORLD.DE's readers sounded off. 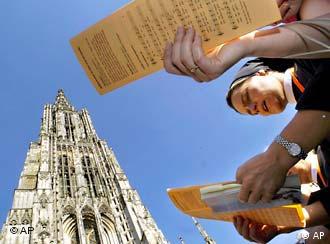 With the constitutional treaty back on the table, Europe is reflecting on its identity

This galvanizing issue has mostly disappeared in the last few years. Why on earth would (Angela Merkel) want to inject this polarizing issue into a constitutional debate that will be difficult enough? She makes such a big mistake with this that my confidence in her political judgment is very shaken. -- David Sheegog, Paoli, Oklahoma, US

Christianity is the root of all of Europe's moral values. -- Marco Gessler

If the EU constitution says that Europe has Christian roots, that will be waving a flag which will only serve to deepen the current polarization between Christians and Muslims. If Christian origins are mentioned, it should be specified what that means. Tolerance, as Angie (Merkel) said recently? Solidarity? It would be interesting to compare those values with what Europe actually reflects today. Will (Merkel) deny six centuries of harmonious cohabitation with Muslims as well as Jews? For someone who has read the Bible and the Koran, it is clear that there are no differences between believers. I still wonder what the differences are between Islam and Christianity. -- Claudia Molina 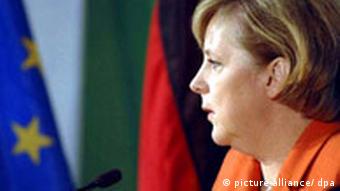 I agree with Merkel that the new EU charter should make a reference to Europe's Christian roots. To be quite honest, I do not see why we have to minimize Christianity because we are afraid we will exclude secularists. -- Glenn Forsythe

It is disappointing that Angela Merkel is bringing up Christianity precisely at a moment in which the world is in desperate need of finding a basis of interrelationship that is different from the traditional exclusiveness of religion -- be it Judaism, Christianity or Islam. If Merkel wishes to include a mention of Europe's "Christian roots" in the European constitution, then it is fair to ask exactly which "roots" she is referring to. "Love your neighbor as you love yourself?" One hardly needs to be a Christian to practice this way of life. Or is Merkel referring to the Christian root that states that only Christians are saved and accepted by God? If so, then what Merkel advocates is no better than what other extremists say. -- Paulo-Juarez Pereira

I heartily agree with Merkel. Others who have chosen to move into Europe did so, one presumes, of their own free will and in a belief that it was a better place to live and work. Any adjustments should come from those who came here, not the other way around. -- Vivla Ray Hill

Germany's chancellor and current EU president Angela Merkel has renewed criticism that the bloc's constitution does not explicitly refer to Europe's Christian roots, in an interview to be published Monday. (21.01.2007)