Should amateurs play sports in a heatwave?

Incidences of professional athletes collapsing while performing seem to have become all too common of late. But in the wake of Europe's heatwave, how should the rest of us get our outdoor exercise? 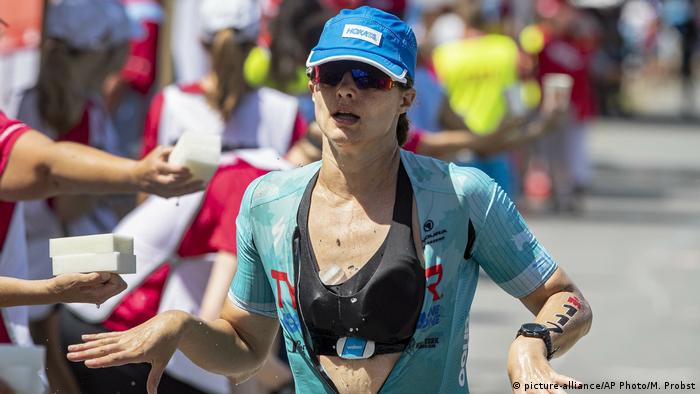 American triathlete Skye Moench was the surprise winner of the Ironman European Championship in Frankfurt on Sunday, crossing the line on the city's famous Römer square after a grueling nine hours, 15 minutes and 31 seconds.

But the 30-year-old's victory was overshadowed by a medical emergency suffered by compatriot and race-leader Sarah True (pictured, top), who collapsed just one kilometer from the finish line due to heat exhaustion in temperatures approaching 40 degrees Celsius (104°F).

True, 37, had been among the leading group since the start of the race, which had begun with a 3.8km (2.3-mile) swim in the Langener Waldsee to the south of Frankfurt city-center, where even the water temperature was over 25°C.

The American, who came second on her debut appearance at the event last season and set a marathon record of 2:54:58 in the process, had built up a seven-minute leader over Moench going into the final stages, when disaster struck.

As she approached the 40km-mark, she began to take several breaks, slowing to a walk before resuming her pace again, but she visibly started to sway and appeared not to notice the aid and cooling stations along the route.

Eventually, 900 meters from the finish, she fell into the arms of a fellow athlete and had to be carried out of the race by Red Cross medics, who were immediately on the scene, enabling Moench to take the lead. "I can't remember the final kilometers," she said a few hours later, still receiving medical attention and praising the medical staff who she said "did a very good job." 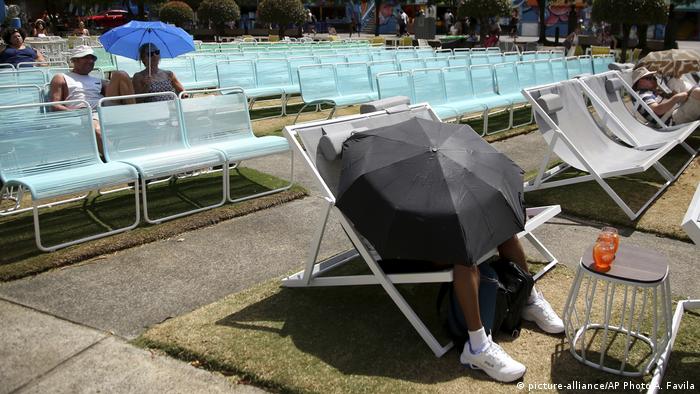 Even watching can be dangerous in the wrong conditions

It wasn't the first time that True had experienced problems in extreme heat; a few weeks ago, she suffered a similar collapse in Cairns in Australia. And she wasn't the only one to suffer in Frankfurt, either, German favorite Daniela Bleymehl also retiring with stomach problems.

With temperatures hitting record levels in parts of Germany (a June high of 38.9°C was recorded in the western state of Rhineland-Palatinate), the German Red Cross issued advice on dealing with the extreme conditions, including a warning to avoid sport in the afternoon, when the mercury rises highest.

Last summer, Karim Bellarabi of Bundesliga side Bayer Leverkusen collapsed during a friendly against Wuppertal and had to spend the night in hospital, with his coach at the time Heiko Herrlich suspecting that the player had not drunk enough water. "It's extreme in this heat," said Herrlich. "Even when you're not playing, it's a brutal challenge for your body."

What should amateurs do?

So if even professional athletes are prone to suffer, what about amateurs? Is it best to simply put that summer training regime on hold during a heat wave?

"Many think that the temperature is the problem but actually it's the intensity of the direct sunlight which exerts a greater strain on the body," Tim Meyer of the Institute for Sport and Preventative Medicine at the Saarland University told Spiegel magazine, highlighting endurance sports such as running and cycling as particularly problematic due to the amount of time spent in the sunshine. "Dangerous situations generally occur due to direct exposure to sunlight." 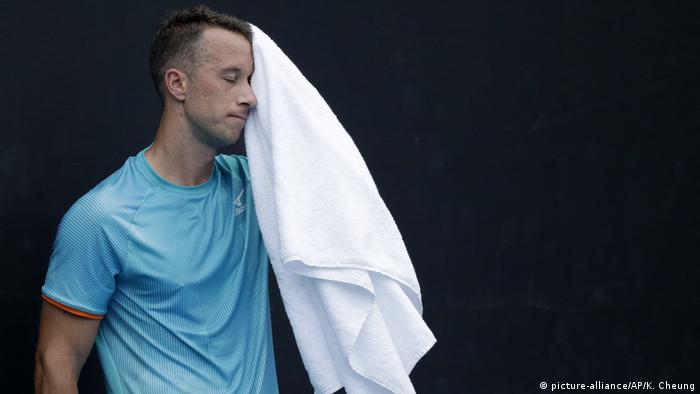 Germany's Philipp Kohlschreiber at the Australian Open, which was played in high temperatures

For that reason, clothing which covers the body while also allowing room to breathe are recommended, plus headwear and high-factor suncream. And of course: drink - a lot.

Experts recommend at least 100ml every 15 minutes, but avoid ice-cold beverages which your body first needs to bring up to the right temperature before processing, expending even more vital energy. During sport, drinks with high magnesium and sodium content are particularly suitable to replace minerals lost in sweat.

When temperatures rise above 30 degrees, even the slightest of further increases can have a significant effect on what your body is capable of, so it's also important to avoid sport at the hottest times of day whever possible. This means starting earlier to avoid the midday sun between 11:00 and 15:00 or, if you're not an early bird, leaving your outdoor workout until later in the evening when temperatures have dropped slightly and, most importantly, there is no more direct sunlight.

For Skye Moench, Sarah True, Daniela Bleymehl and the other Ironman competitors, an earlier or later start wasn't an option - the event takes most athletes over 10 hours. Fortunately, expert medical assistance was on hand in Frankfurt to prevent a more serious situation.

Patrick Lange's record-setting victory in Hawaii marked the fifth year in a row that a German has won the competition. Austria's Daniela Ryf overcame a jellyfish attack to claim her fourth Ironman Championship in a row. (14.10.2018)

Australian Open organizers have come under fire from players and the media after they failed to act on soaring temperatures. The tournament's own heat policy was not enforced despite temperatures reaching 40 degrees. (18.01.2018)