Transporting goods around the world contributes hugely to global carbon emissions. In turn, climate change has thrown global shipping patterns into disarray. The cargo industry is responding by trying to clean its act. 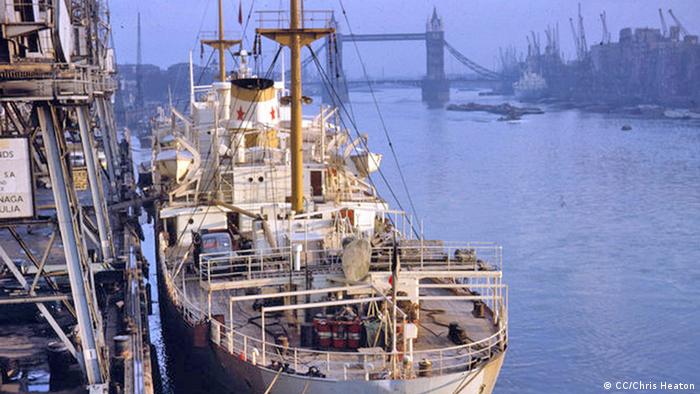 When we wake up to a morning cup of coffee, we might think about the taste or the smell or even the effect of the caffeine, but rarely do we ponder the way those coffee beans made their way into our cup. That’s because the logistics industry is supposed to be invisible, regardless of what’s being shipped.

"Everyone wants stores to be full, but nobody wants to hear the trucks or freight trains or smell the fumes from the container ships," says British logistics specialist Alan McKinnon. But the logistic industry’s success at making itself indeed invisible has also created myriad problems.

The sector is responsible for around six percent of global greenhouse gas emissions, according to an estimate by the World Economic Forum. Most of those emissions are generated when goods are transported, whether the destination is domestic or international. The energy required to power warehouses and build freight containers only exacerbate the problem.

Yet ironically enough, the environment is fighting back. Climate change has drastically altered important logistics networks and routes, at times wreaking havoc on a global industry which depends on reliable transport. Take a typical example of logistics: Indonesian coffee being transported to a London suburb. 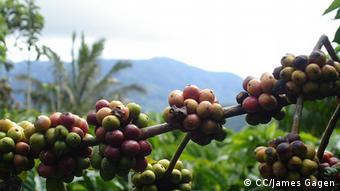 Indonesia is one of the top coffee exporters in the world. Each month, it ships around half a million sacks of beans – 60 kilograms each – abroad. Indonesian java is in high demand, especially in London and New York.

The supply chain can be traced back all the way to the coffee plantations strewn across Indonesia’s many islands. From there, the harvests are transported to bigger cities, where the beans are prepared to be shipped internationally. And it’s here at this early point in the supply chain that the impacts of climate change could already disrupt logistics.

With extreme weather events growing increasingly more common, it’s possible that floods or storms can destroy the coffee handling facilities in Indonesia itself.

"We saw that in 2012 with the super storm Sandy in America, and with the floods in Thailand in 2011 where several factories and storage facilities in Bangkok were flooded,“ McKinnon says.

Just three years ago, the German reinsurance giant Munich Re reported that the number of extreme weather events a year had tripled since 1980 – and with it the rising cost of damages. 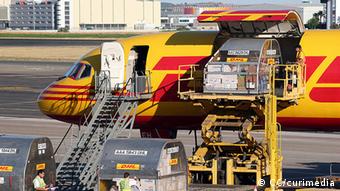 Air freight is fast but not particularly environmentally-friendly

"The problem is the uncertainty,“ McKinnon says. He teaches at the Kühne Logistics University in Hamburg and has studied supply chains in Southeast Asia. There are various scenarios for how the climate will develop in the current century and each scenario, says McKinnon, carries it own consequences.

"Companies try to protect their supply chains from all types of disruption, but it’s difficult. Climate change is for them only one risk factor of many,” McKinnon says. "They plan for a variety of eventualities, from labor strikes to terrorist attacks. At the moment, a lot of companies are confident that their current systems can deal with the consequences of climate change,“ McKinnon says. And smaller logistics firms, he adds, are likely to point out that they lack the financial resources to adapt to the potential consequences of climate change.

Back to the Indonesian coffee case, though: once the beans are packaged in large sacks, they’re brought to a big port, like the one in the capital Jakarta, because shipping by sea is the most common form of transport in the logistics industry. According to a UN conference report, shipped goods account for 80 percent of cargo transported around the world and 70 percent of the financial costs. That’s why ports are a crucial hub in the global logistics industry.

At the same time, ports are also especially vulnerable to climate fluctuations. The same UN report warns that rising water levels could flood ports and erode the coastal area, potentially damaging essential infrastructure along the shoreline. On top of that, extreme weather events can disrupt transport on water or land, leading to bottlenecks in the supply chain. Not to mention that rising temperatures could also make ports use more energy, for instance for cooling systems and additional warehouses.

In some countries, port authorities are already adapting to the weather changes. In the Netherlands, where around a fourth of the country’s territory is below sea level, officials have installed kilometer-long levees along the coastline. Southeast Asia, though, has been slower to adapt. 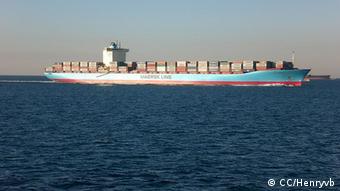 Important logistic routes can at times benefit from climate change

"Some companies prefer to look at the benefits of climate change,“ Alan McKinnon says. Rising sea levels, for example, could be beneficial as container ships grow larger. A freighter can currently carry up to 8,000 standard containers that are 20 feet long (12.192 meters). "But by the end of 2013, a new generation of ships will have the capacity to hold 18,000 standard containers. So the ships will need deeper water in the port and inlet areas,“ he says.

London is proof of that phenomenon: the city on the Thames has long been an important port, but when the ships became to big to fit in the inner harbor area, the port itself was moved down river, closer to the mouth of the Thames.

The Indonesian coffee route snakes through the Indian Ocean past India, through the Gulf of Aden and beyond into the Red Sea. The ships pass through the Suez Canal and the Mediterranean, sailing by Western Europe to finally reach London. A trip that would take only a few days by air takes three to four weeks by sea, McKinnon says.

"In recent years, a lot of container ships have reduced their speed by 15 to 20 percent, from around 21 or 22 knots to 18 knots average speed. So the trip from Southeast Asia to Europe takes on average four to six days longer,“ he says.

Companies call this process "slow steaming,“ where container ships operate well below maximum speed in order to save money on fuel. "That’s also had a welcome side effect in that CO2 emissions have fallen as well,“ McKinnon says. "That gives ship transport an environmental advantage over air freight.“

However, trucks and planes continue to play an increasingly important role in cargo transport, despite their negative environmental consequences. That’s why the European Union is investing in new infrastructure to boost rail traffic, domestic water routes and ports.

"But there are very few canals in Great Britain, so not much is transported on barges. Trucks are more common,“ says McKinnon, who helped advise the European Commission in an expert group on logistics in 2011. 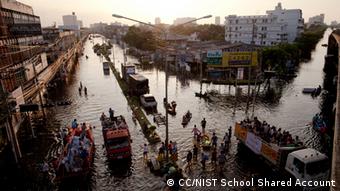 But the shipping industry, with its lighter carbon footprint, still faces several challenges. In the case of the coffee-bearing container ship from Indonesia, if it took another route and headed, say, to Rotterdam, the third-largest sea port in the world, many of the sacks would have been transferred to river barges for inland travel. But that’s where they would have to deal with another consequence of climate change - less rainfall.

"Canals and other inland waterways are susceptible to droughts. We saw that in Europe in 2003 or in Mississippi in 2012,“ McKinnon says. In that example, it rained so little that the river levels fell drastically, severely restricting shipping.

It’s ironic, McKinnon says, that the eco-friendliest shipping method is perhaps most vulnerable to the changing climate.

That phenomenon has now spawned a new research area – green logistics. Eco-friendly logistics works on different levels - in technology, organization and policy. Finland for example created a truck that is 15 percent more energy efficient than traditional transporters. And Japan has built an impressive “super eco-ship” that emits two-thirds less CO2 than a regular freighter.

The companies Kelloggs and Kimberly-Clark are teaming up to better coordinate and utilize their transport networks, and several firms have started to measure their carbon footprints – from the start of the supply chain to the end – and research ways to improve their environmental records.