Borussia Dortmund's difficult start to 2018 continues after they needed a goal from Shinji Kagawa to rescue a point in Berlin. The Japanese midfielder's header was one BVB's few bright spots in a 1-1 draw with Hertha. 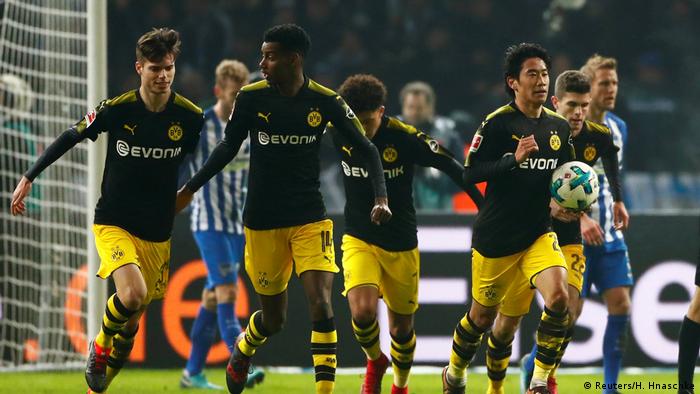 After two wins in a row to start his Dortmund reign, Peter Stöger has to make do with two draws from his next two.

A Shinji Kagawa equalizer rescued Dortmund a point but they lacked incisiveness in their attacking play, not surprising given the decision to omit Pierre-Emerick Aubameyang, the man responsible for a third of their league goals this term.

Both sides lacked cohesion in a soporific first half that was without a shot on either goal. But the game burst in to life seconds after the break when Hertha’s Davie Selke scuffed home Valentino Lazaro’s low cross.

Dortmund, who started Andre Schürrle up top, struggled to impose themselves for a while after that but managed to grab an equalizer in their first spell of real pressure. English teenager Jadon Sancho was tenacious enough to retrieve his own blocked cross before teeing up Kagawa to nod home.

The hosts tired as the game went on and Dortmund looked the more likely to score – substitute Alexander Isak struck the bar with a fierce drive before Andriy Yarmolenko had a penalty shout turned down – but it wasn’t to be.

FULL TIME: That's it, the points are shared in Berlin.

90+3 Yarmolenko tries to get a ball down in the box surrounded by Hertha players. He appeals for a penalty but not given. The defender did have an arm around him there...

90+1 -- Isak is in plenty of space but opts to try and chestpass to a teammate on the right when Sancho was free behind him. Dortmund outnumbered Hertha there and it was a bad decision from the young Swede.

89' -- Selke almost dances his way in to the box but Töprak sticks a leg out at the last moment.

86' -- Hertha look exhausted and Isak almost takes advantage, stabbing a volley wide before hammering a shot on to the bar. Great strike, but unlucky.

85' -- Toljan almost provides it, getting decent contact on the volley as the ball dropped out of the sky. Kraft gets down to make a sharp stop. Yarmolenko on for Pulisic.

82' -- Isak finds Sancho with a lovely backheel but the Englishman screws his shot wide from the corner of the six yard box.

79' -- Hertha have brought on Leckie and the pacy Aussie winger finds himself in a decent position down the left. But his touch is woeful.

74' -- Kalou leads a break for Hertha but is dispossesed far too easily.

71' -- GOAL! Sancho pounces on a mistake on the left. He's denied by a Stark tackle then picks himself up and dinks a cross over the keeper for Kagawa to nod home. Game on.

69' -- Schürrle, who has been largely anonymous up front, flashes one across goal but there's no one to take advantage. Töprak then has a dreadful speculative punt.

66 -- Kalou breaks down the center but can't find a way through. Dortmund still not really threatening.

62' -- Hertha have the ball in the net but it's ruled out. Götze was robbed before Hertha fed Kalou. As Bürki advanced, the Ivorian nudged it on to Duda, who was clearly offside.

60' -- Decent chance fluffed by Kagawa. Toljan got away down the right and whipped one in but the Japanse midfielder couldn't adjust his feet in time.

56' -- Götze again involved as he almost latches on to aball in the box, but Kraft is out quickly. Then Pulisic draws a save from the keeper with a rising drive.

52' -- Götze weights one nicely through to Schürrle who overhits a simple cross. Poor.

51 -- Sokratis finds Götze, who spreads it side but Stark meets the cross. Dortmund starting to have a little of the ball now.

49' -- Hertha's tails are up now. Plattenhardt plays a smart one-two with Kalou and looks to cross, but it's blocked.

46' -- GOAL! That was quick. Lazaro - who has been a threat all night - turns brilliantly, exchanges passes and whips in a lovely low ball, which Davie Selke scuffs home.

HALF TIME: That's it. A dull half comes to an end. Neither side had a shot on target. Enough said.

45' -- Lazaro again provides a little spark to Hertha but his cross flies across goal.

43' -- This is really pretty dull stuff. It's hard to say whether Dortmund are missing Aubameyang or they're just off the pace. Hertha seem more than happy to soak up the pressure.

38' -- Götze's free kick is easily cleared but falls to Töprak, who makes a decent connection but sees his shot blocked.

35' -- Sancho, set free by Kagawa, is in a decent position to shoot but opts to cross low and it's easily cleared.

32' -- Piszczek gets a touch on a deep cross, needlessly, and Dortmund angrily protest the award of the corner. Stark wins it in the air from the delivery but heads wide.

30' -- Lazaro whips the dead ball in to the side netting. That, unfortunately, is as close as we've come.

29' -- Pulisic goes in the book for hauling back Plattenhardt.

26' -- All getting a bit scrappy in the middle of the park. Neither side demonstrating much guile.

22' -- Plattenhardt puts it narrowly over the bar.

21' -- Weiser pops one up to Lazaro, who nods it back. But the fullback's shot is wayward. Now Hertha have a set play....

19' -- Toljan feeds Pulisic on the overlap and the American's cross drops in the box. But Kagawa can't get it out of his feet.

16' -- Sancho, who has looked bright so far, causes a bit of havoc in the Dortmund defense. It eventually falls to Weigl, who balloons it over.

14' -- Pulisic jinks down the right and floats it in towards Kagawa but it's just too high for the Japanese midfielder.

11' -- Lazaro works a bit of room down the right but his cross is blocked. Then Selke has a go, same result.

8' -- Slow stuff from both sides so far, which probably suits Hertha.

5' -- Lazaro flies down the right and stands one up but Dortmund get a head to it and clear.

3' -- Dortmund concentrating their early attacks down the left, with Sancho heavily involved. Not much doing so far though.

Looks like more or less a full house at the 74,475-capacity Olympic Stadium. Hertha average a little over 40,000 in the league.

Peter Stöger has been speaking to broadcasters Eurosport ahead of kick off. He said he'd welcome Aubameyang back if the striker could "help the team." On his replacement, Andre Schürrle, Stöger said: "I hope he can show his quality. I'm not putting any pressure on him."

He hasn't left yet but tonight's game looks very much like the start of the post-Aubameyang era for Dortmund. The striker also missed last week's goalless draw with Wolfsburg but his situation now looks untenable.
Alexander Isak made his full debut in Aubameyang's stead last Sunday but Andre Schürrle is preferred by Peter Stöger this evening. The winger's selection highlights Dortmund's lack of striking cover but they have plenty of options on the wings, and young Englishman Jadon Sancho gets a second consecutive start, along with fellow teenager Christian Pulisic.

For hosts Hertha, captain Vedad Ibissevic is on the bench, along with Australian winger Mathew Leckie while Thomas Kraft makes a rare appearance in goal. Davie Selke looks like the major threat to Dortmund, who will go second if they pick up three points at the Olympic Stadium for the first time since 2014.