Hundreds of Shiite protesters have taken to the streets of Bahrain on Saturday, which marks the fourth anniversary of Arab Spring-inspired demonstrations in the island country. 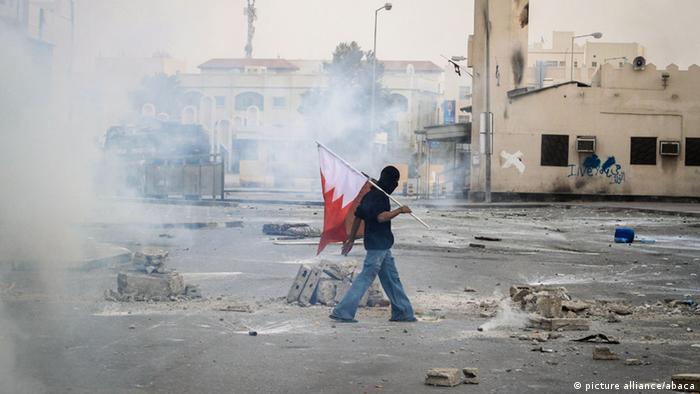 Men and women waved the country's flag and held up portraits of imprisoned activists as they marched. Witnesses say they chanted "Down Hamad," referring to Bahrain's Sunni King Hamad bin Isa Al Khalifa.

Tires were burned and village roads blocked off by protesters using rocks, branches and garbage containers.

Security had been boosted in preparation for the event, in an attempt to keep demonstrators out of the Bahraini capital Manama. Pearl Square, at the heart of the city, was the focal point of the 2011 revolution, and remains closed off.

Police fired tear gas and sound bombs at marchers, though there were accusations on Twitter of shots being fired causing injuries, and of several people being arrested.

No casualties were reported.

Earlier in the week authorities had advised Bahrainis to stay away "from activities that could negatively affect security or general order," warning that anyone involved in violence would be held responsible.

Protest action is restricted in the tiny island nation, with opposition activists banned from gathering in large groups. Tactics such as security checkpoints and tear gas are used by government forces to stop protestors from making it to major highways.

Bahrain is home to the US Navy's 5th fleet, and is a key Western ally in the fight against "Islamic State".

Four years ago Bahrain's Sunni monarchy moved swiftly to shut down protests led by the country's majority Shiite population, motivated by a wave of similar action across the Middle East and North Africa.

Within weeks Bahraini authorities, supported by Saudi and Emirati security forces, had snuffed out all protests.

Since then, relations between the Sunni administration and its largely Shiite opponents have continued to deteriorate, with repeated talks unable to come to a resolution.

The opposition boycotted November's parliamentary elections, at which Sunnis won the majority of seats.

In recent years, Bahrain has been heavily criticized by human rights groups for revoking the citizenship of several activists.

In a statement, Amnesty International said fundamental freedoms have increasingly been curtailed and called on the kingdom to use the anniversary to "announce genuine and long overdue reforms".

On Monday authorities closed down broadcaster Alarab News Channel, just over a week after it had launched. One of its first broadcasts was an interview with a Shiite opponent of Bahrain's leaders.