Shell says it has greatly reduced the flow of a leaking oil pipeline in the North Sea, but environmental groups say Shell's response raises questions about the oil industry's ability to tackle disaster in colder regions. 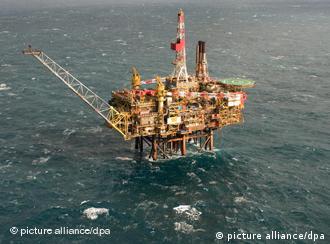 Oil began leaking under the drilling platform a week ago

Royal Dutch Shell officials are sticking to assurances that an oil spill in the North Sea is under control.

"The rate of leakage from the flowline to the Gannet platform continues to decline and currently stands at less than one barrel a day," said Glen Cayley, technical director of Shell's European exploration and production activities.

The Gannet platform is located off the coast of Scotland and has been leaking since last Wednesday (10.08.2011).

Shell has admitted that the oil had found a "second pathway" to seep into the ocean, but said on Tuesday that this didn't amount to a new leak.

"The primary leak in the flow line is pretty much dead," Cayley said.

"There is a small secondary leak created by that which is the small flow of two barrels a day, which is proving a little difficult to get to and isolate. This is complex sub-sea infrastructure, and really getting into it amongst quite dense marine growth is proving a challenge."

No visible damage to wildlife

The company was not able say when it expected the oil to stop leaking. Shell said so far 218 tons of oil, about 1,300 barrels, had leaked into the North Sea. 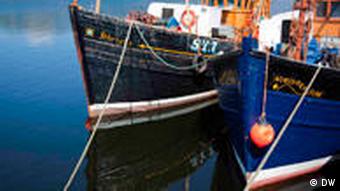 The oil isn't expected to reach the shore of Britain

The spill on Shell's Gannet field, which it co-owns with Exxon Mobil and which lies 180 kilometers (112 miles) off the Scottish city Aberdeen, had been leaking for two days before Shell and the authorities went public with the information on Friday.

"Only when we had confident information, really, did we want to share that, and since Friday we have issued daily bulletins and updates," Cayley told the BBC.

Greenpeace spokesman Ben Ayliffe, repeating concerns from the Royal Society for the Protection of Birds on Monday, said, "Any oil spill has the potential to significantly impact things like the birds, especially when we are this close to the breeding season."

Shell said it was working with environmental groups and that observers had reported no visible damage to wildlife.

Richard Dixon, director of the wildlife group WWF Scotland, said the difficulty that the company experienced in dealing with a leak in the relatively accessible North Sea raised questions about all energy companies' plans to drill in the Arctic.

"It really does make you question the entire oil industry's ability to respond, had this accident been on a larger scale or in the much more difficult waters of the Arctic," he said. 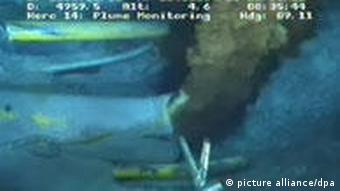 The leak doesn't compare to the BP accident but is bad enough, the DECC said

British government officials have said the spill was expected to disperse naturally before reaching any shores. The spill is estimated to be larger than the annual spill totals for the past decade, according to figures from the UK Department of Energy and Climate Change (DECC).

"Although small in comparison to the Macondo, Gulf of Mexico, incident, in the context of the UK Continental Shelf the spill is substantial, but it is not anticipated that oil will reach the shore and indeed it is expected that it will be dispersed naturally," the DECC said in a statement.

"The UK Continental Shelf oil spill record is strong which is why it is disappointing that this spill has happened," the DECC said. "We take any spill very seriously and we will be investigating the causes of the spill and learning any lessons from the response to it."

Royal Dutch Shell has said a leaking pipeline from a North Sea oil field is now 'under control.' The firm discovered the seeping crude last Wednesday and dispatched a remote-controlled robot to the scene. (15.08.2011)

One year after the disastrous Deepwater Horizon oil spill in the Gulf of Mexico, the EU's energy commissioner wants to make sure oil companies are held responsible for cleaning up pollution off the coasts of Europe. (20.04.2011)

A year after the disastrous oil spill caused by an explosion on the Deepwater Horizon drilling platform in the Gulf of Mexico, Norwegian scientists use a simulator to improve safety procedures and prevent such accidents. (20.04.2011)