Having overcome the disappointment of local lad Rory McIlroy missing the cut, the crowd at Royal Portrush golf course in Northern Ireland were still delighted to see an Irishman win. Lowry never surrendered his lead. 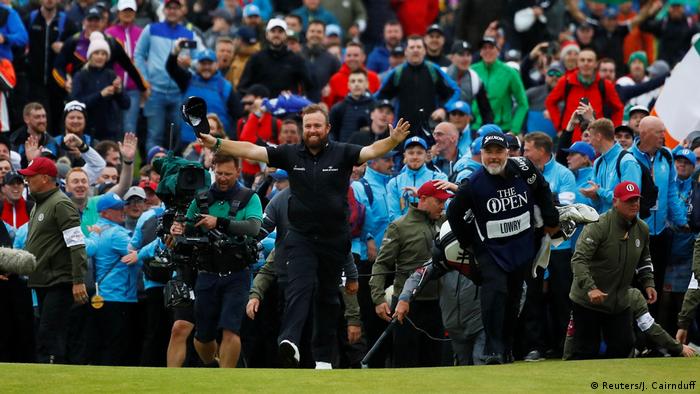 Ireland's Shane Lowry overcame a bogey on the first hole of his final round to claim his first ever major championship 17 holes later.

In poor weather conditions, Lowry overcame a few small wobbles to seal a victory that delighted the crowd at the Royal Portrush golf course in Northern Ireland, who were hosting The British Open for the first time in 68 years. In a battle with England's Tommy Fleetwood that eventually became about who could drop fewer shots, Lowry came out on top.

"My mum and dad, they sacrificed so much for me when I was younger and I'm so happy I can hand them this trophy tonight," Lowry said afterwards, trophy in hand and voice almost broken with emotion.

Tee times had been moved up an hour to avoid the worst of the conditions, although a brief spell of torrid weather by the time the final pair made the seventh hole did make life harder for all the golfers on the course.

The winner of the 148th Open picked up three birdies in the front nine and despite finishing with back-to-back bogeys, he was still ahead by five going at the turn.

The Irishman bogeyed the 11th and when Fleetwood birdied the 12th to cut Lowry's lead to four with six holes left suddenly doubt crept in.

In the last 20 years, only four players have not won a major after having a third-round lead of four shots or more. Lowry is one of them, when he threw away his chance to win the 2016 U.S. Open. His tee shot on the 13th landed straight in the bunker, and it looked like the nerves had arrived again. But Lowry, who came off a career best day having shot an 8-under 63 for a British Open record after three rounds, held his nerve. He chipped beautifully out of the sand to land the ball within a few feet of the hole before making a huge par. 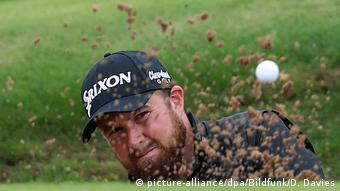 Lowry played better than anyone else during difficult weather conditions

Fleetwood, who started the final round just four shots behind Lowry, struggled to put enough pressure on Lowry and was ultimately undone on the 14th. Lowry bogeyed, but Fleetwood double-bogeyed and with that his chance was gone. Lowry led by five with four to play, and when he birdied the 15th even the 32-year-old must have started to believe.

Nine of the last 10 men's golf majors have been won by Americans, but Lowry broke the U.S. streak with victory on the links course to the delight of the crowd. Walking up the 18th, Lowry raised his arms in the air, his face full of emotion. Supporters roared and chanted his name. Lowry knew the Claret Jug was his.

Lee Westwood, Rickie Fowler and former Masters champion Danny Willett all had highs and lows on their final day, but couldn't stay consistent for long enough to truly challenge.

Defending champion Francesco Molinari finished with a fine 5-under-par 66 to be 3-under for the tournament. World number one and four-time major winner Brooks Koepka struggled to recover after bogeying the first four holes and finished the day 3-over-par, and the tournament 6-under.