Sexuality at Issue in Police Case Files | Germany | News and in-depth reporting from Berlin and beyond | DW | 25.07.2005

Police departments in three federal states use a software program that records whether or not a person involved in a case is homosexual. One parliamentarian said it reminds him of the Nazis' notorious "Pink Lists." 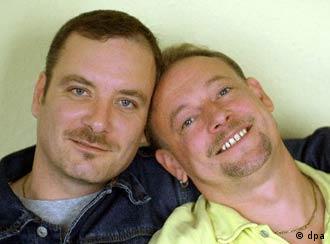 The computer programs used by the states of Bavaria, Thuringia and North Rhine-Westphalia to record cases and track their progress allow investigators to categorize suspects as homosexual or the scenes of crimes as "locations frequented by gays and lesbians." By entering the abbreviation *omosex*, personnel can call up all data files on cases in which homosexuals or gay locales are involved.

Data protection officials and gay and lesbian advocates have been outraged by the discovery, noting that the so-called "homosexual paragraph" -- the law that once made homosexuality punishable by law -- was struck from the books in 1994.

The data protection commissioner from the state of North Rhine-Westphalia, Bettina Sokol, said the practice was "very questionable," telling the newsmagazine Der Spiegel that information about sexual orientation belongs to a category of data that should have the highest degree of protection and only be recorded in exceptional cases and under strict guidelines.

According to the magazine, the departments of Bavaria and North Rhine-Westphalia have now blocked the category "location frequented by homosexuals" from their digital case files, but the key word "homosexual" is still enabled.

In a letter to the interior ministers of Thuringia and Bavaria, Volker Beck, a parliamentarian who often addresses gay and lesbian issues, said the police software in use "brings up unpleasant memories of old police practices such as the keeping of 'pink lists'." Those lists were records of gays that were kept during the Nazi era and used in the persecution of the minority group.

The association that represents German gay and lesbian police employees, VelsPol, says it suspects that the practice of saving the category "homosexual" on case files is widespread. It notes on its Web site that one of the computer programs in question, IGVP, has designed its categorization system so that the key words "location frequented by homosexuals" is side by side with "peepshow," "brothel," and "prostitution area."

The Cologne police has disbanded one of its special weapons and tactics units as prosecutors opened inquiries against several of its members for fraud, drug use, manslaughter and theft. (July 16, 2004)

Being Turkish and Gay in Germany

Germany may be considered a tolerant place for homosexuals. But continuing social stigma still makes it difficult for many of the country's gay and lesbian immigrants to be open about their sexuality. (July 19, 2005)