Severe weather wreaks havoc across Europe | Europe| News and current affairs from around the continent | DW | 06.12.2010

After a week of bitterly cold weather in Europe, temperatures begin to rise across the continent. However more deaths are recorded in Poland, Germany and floods displace thousands in the Balkans. 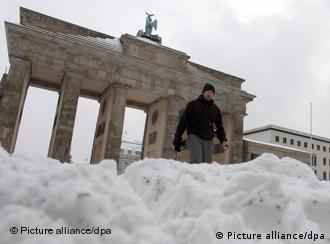 The snow may be thawing, but problems persist

After an unusually early and severe start to winter which has killed more than 60 people, temperatures are beginning to rise across Europe.

However the mercury has remained below freezing point in many areas.

In Poland, five more people died as temperatures early on Sunday fell to minus 24 degrees Celsius (minus 11 Fahrenheit). This brought the death toll there to 36 since the beginning of the month and 51 since the start of September. Most of the victims were homeless people seeking shelter in unheated abandoned buildings or garden sheds.

The deaths overnight of a man and woman in Prague brought the number killed in the cold snap to six in the Czech capital.

Trouble on the autobahn 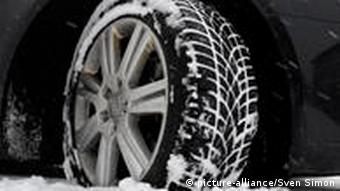 New winter tires are compulsory on all German cars

In Germany, temperatures rose to just above freezing in many areas, however ice and snow caused chaos on the country's road networks. Despite a recently introduced law that makes winter or all-weather tires compulsory, there were hundreds of car accidents over the weekend.

In the region of North-Rhine Westphalia alone there were nearly 500 accidents that left dozens injured and killed one woman. In Lower Saxony, two people were killed when a minibus driver skidded on an icy road and hit two trees.

The German Weather Center said temperatures will rise to be around "10 degrees higher than the middle of last week," although warned some heavy rain was expected.

Floods in the Balkans

A week of torrential rain in Albania has turned roads into raging torrents and left some 14,000 hectares of farmland under water.

More than 11,000 people were evacuated in northern Albania, and the country has called for outside help as it struggles with its limited police and army force. The only way into the town of Shkodra was by boat or helicopter with two streets under 2 meters (6.5 feet) of water.

Around 1,000 soldiers have been called in to help the population of Montenegro as flooding on the border with Albania continues to pose a problem.

In Bosnia, three people were killed in the north of the country when their home collapsed due to a landslide triggered by heavy rains. 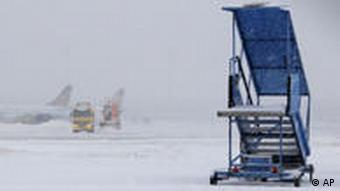 The UK has also been affected by the snow flurries and continued to face problems on Monday.

Edinburgh Airport canceled all of its flights until at least 6 p.m. local time on Monday as the airport tried to get back on schedule after flight cancellations last week.

British schoolchildren returned to their lessons on Monday after missing several days of class last week due to safety concerns over snow and ice.

Hundreds of thousands of passengers inundated Spain's airports on Sunday as the military forced air traffic controllers to end a 24-hour wildcat strike with the threat of imprisonment. (05.12.2010)

As Europeans suffer from the first cold snap of the winter, travelers have been facing delays and cancelations. Deaths were reported in Germany, Poland, Lithuania and the Czech Republic. (02.12.2010)

Airports close as Europe is hit by icy weather

Snowfalls and freezing weather have hit Europe with a vengeance. The cold conditions have already claimed at least nine lives and caused considerable disruption to travel. (01.12.2010)