Unusually heavy rains have caused bad flooding in southeastern France and northwestern Italy. At least three people have died, and many more are without electricity or road access. 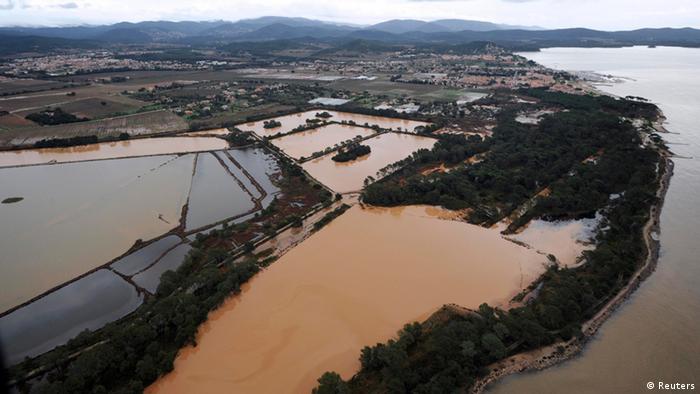 Officials said 4,000 homes in the department of Var in the southest of France have been left without power, and 150 people were airlifted to safety.

Local official Laurent Cayrel said one of the victims, a 73-year-old man, died in his basement, while the other was swept away in his car, both on Monday. The missing man was last seen on his boat.

Dozens of towns were closed across the region, which includes resorts such as Saint-Tropez and villages in Provence.

In the town of Hyeres, Mayor Jacques Politi spoke of "a historic flood."

Waters were reported to be receding early on Monday. French Prime Minister Jean-Marc Ayrault traveled to the area on Monday to inspect the damage.

Several days of heavy rain have also caused floods and landslides in the northwestern coastal region of Liguria in Italy, where a 66-year-old doctor died after being washed away by floodwaters on his way to visit a patient.

Further inland, another man is missing near the city of Modena after he capsized in his rubber dinghy while trying to rescue people stranded by swirling waters there. Authorities have taken 600 residents in Modena to safety, media reported.

Last Friday, a train traveling to France derailed because of the floods. Two people were injured.