Several students injured in school rampage | Germany| News and in-depth reporting from Berlin and beyond | DW | 17.09.2009

An 18-year-old student ran through a school in Bavaria armed with several petrol bombs Thursday morning, injuring ten classmates, two seriously. The police ended the attack by shooting the boy in the legs. 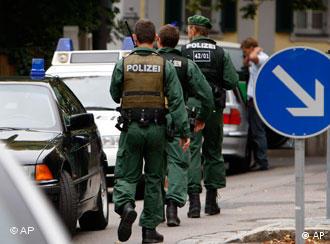 Police were quickly on the scene in force

The Carolinum high school in Ansbach, Bavaria, became the scene of another school rampage shortly after 8.30 Thursday morning, when 18-year-old Georg R. threw two petrol bombs into a classroom.

Two students ran to the principal's office, from where the police were alerted. Georg R. was stopped ten minutes after the attack when police fired several shots at him. He was seriously injured and taken to hospital in a helicopter. Apart from the incendiary devices, the boy was found to be carrying an axe and several knives. 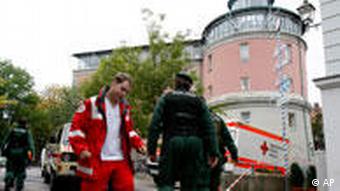 Nearly a dozen students were injured in the attack

According to school principal Franz Stark, teachers carried the injured students out of the school and evacuated the rest. Police searched the school for any other assailants. None were found, and there is currently no reason to suspect that the student had any accomplices. He is to be charged with attempted murder.

News reports suggest that one teacher may have saved lives by barricading her classroom during the attack. After hearing screams and noticing smoke in the hallway, the teacher locked the door and pushed tables and chairs in front of it. "Then we hid in the corner," one student told a local radio station.

The school, one of the oldest in Bavaria, was not equipped with a special alarm for violent attacks or a PA system. For this reason many of the students believed that a routine fire alarm exercise was in progress when the school was evacuated. 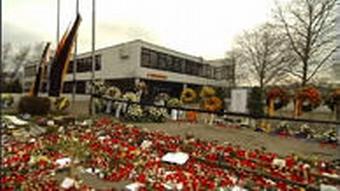 15 people were killed in the Winnenden shooting spree in March

Some German schools have been equipped with extra alarms for rampage attacks, after public concern was heightened by the Winnenden shooting in early March, when 17-year-old Tim K. shot and killed nine students and three teachers at the Albertville school in the small town of Winnenden in Baden-Wuerttemberg.

Speaking shortly after the incident, Bavaria's minister of justice Beate Merk told reporters in Munich, "My main concern is for the injured pupils. They and their classmates and teachers need to be offered competent psychological support as soon as possible in order to avoid lasting trauma."

Families of victims of the Winnenden massacre have come together to push for stricter gun laws in Germany. (08.05.2009)

In the German town of Winnenden, the community struggles to cope with the trauma of a school shooting (14.03.2009)

The shooting spree at a school in the south of Germany on Wednesday added to the growing list of killings by students at schools and universities. (11.03.2009)