Several injured in 'riots' at Turkish embassy in Brussels

A riot has broken out between pro and anti-government groups in front of the Turkish embassy in Brussels. The incident comes as European countries warn of spillover from a polarizing referendum in Turkey. 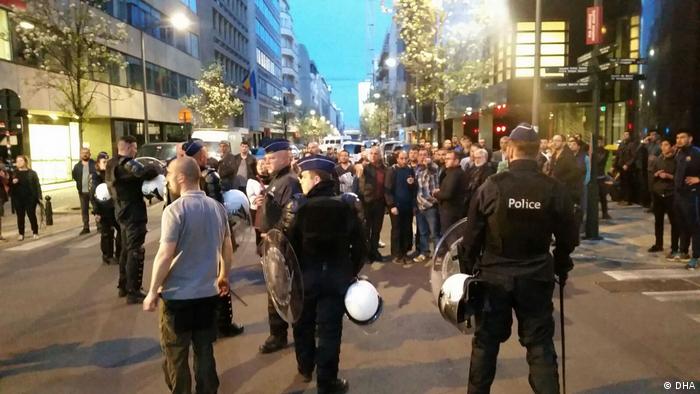 Several people were seriously injured in a brawl between supporters and opponents of Turkish President Recep Tayyip Erdogan in front of the country's embassy in Brussels on Thursday.

Belgian Prime Minister Charles Michel condemned the "riots," which he linked to an upcoming referendum to dramatically expand Erdogan's powers.

"The Belgian government has absolute zero tolerance for any spillovers from the Turkish referendum. I condemn the riots at the embassy in Brussels," he said on Twitter.

The incident occurred as Turkish citizens living in six European countries have until April 9 to cast ballots in the referendum. The vote in Turkey is on April 16.

Relations between the European Union and Turkey have been tense in recent weeks, with Erdogan accusing several European countries of "fascist" and Nazi-like practices for banning or blocking Turkish ministers from campaigning.

European governments have warned of social and political tensions over the contentious referendum spilling over into their countries.

Thursday's violence reportedly broke out between "Yes" and "No" voters. Turkey's Dogan News Agency reported four people were injured before police intervened between the two camps, who then proceeded to shouted slogans at each other.

The pro-Kurdish Firat News Agency said three Kurds were stabbed by pro-government supporters as they went to cast their ballot.

The EU has called on Turkey's envoy in Brussels to explain President Erdogan's warning about Europeans being unsafe on the world's streets. The German foreign minister has advised keeping channels with Ankara open. (23.03.2017)