Several people were injured after a shooting in Berlin's Kreuzberg district. A manhunt is underway for the main suspect, but Berlin's prosecutors office has linked the shooting has to organized crime. 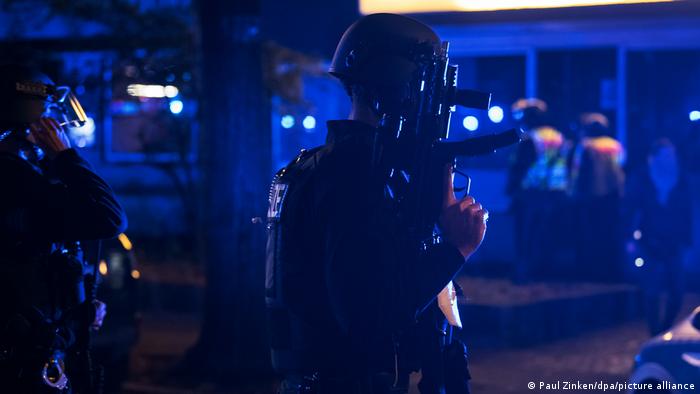 A police spokeswoman said four people were taken to the hospital following an altercation involving several people in the Kreuzberg district. The fire brigade spoke of three seriously injured victims.

A photographer for DPA said the shooting took place in a gateway on Stresemannstrasse, close to the offices of the center-left Social Democratic Party (SPD).

Reports suggest one of the injured men was pulled out of a nearby canal after he jumped in to try to avoid the shooting.

The other three were found in a driveway, DPA reported.

Emergency services initially treated the injured at the scene but they now been moved to hospitals.

The Berlin Prosecutor General's Office tweeted that "several suspects" were being investigated for attempted murder and described the shooting as taking place "in the context of organized crime."

Armed officers were deployed to the scene to search for those who may have carried out the shooting.

Reports said a police helicopter was seen circling the area, and officers had also searched around the Möckernbrücke subway station.

Berlin sees its fair share of disputes — some of them violent — between different groups or criminal family clans.

Most recently there was an attack by about 10 men on a ground floor flat and a car in Kreuzberg after a 29-year-old was shot.